Man alleged to have clocked car’s mileage by over 170,000km to increase value of Toyota Avensis 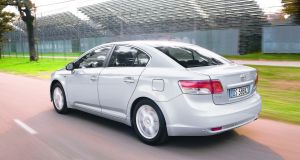 It will be alleged by the State that the Toyota Avensis’s mileage was reduced by more than 170,000km when it was sold to the injured party. Photograph: File photo

A Cork man has been temporarily banned by a court from accessing the buy and sell website www.donedeal.ie after he allegedly ‘clocked’ a car he then advertised for sale online.

James O’Donoghue (28), was brought before Limerick District Court on Tuesday, charged with dishonestly and by deception, inducing another person into purchasing a Toyota Avensis, having knowingly tampered with the car’s odometer and reduced the car’s genuine mileage.

Mr O’Donoghue is alleged to have clocked the car’s mileage by over 170,000km to increase the value of the car.

It’s alleged he did so with the intention of making a financial gain for himself or to cause financial loss to another person.

Mr O’Donoghue, of Carrigroe, Mitchelstown, is alleged to have sold the car to the injured party, at Roxboro Road, Limerick, on December 9th, 2014, contrary to Section 6 of the Criminal Justice (Theft and Fraud Offences) Act, 2001.

It will be alleged by the State that the Toyota’s mileage was reduced by more than 170,000km when Mr O’Donoghue sold it to the injured party, who it will be further alleged suffered financial loss of €3,000 after purchasing the car for over €9,000.

It’s understood the injured party only became aware of the alleged clocking of the car last January, after it was serviced at a garage.

Judge Marian O’Leary granted Mr O’Donoghue bail, on his own bond of €300, and on a number of strict conditions, including that, “he does not use or operate on donedeal.ie”.

The accused was also ordered by the court to reside at his current home and to notify gardaí of any change of address; and, to sign on three times a week at Mitchelstown garda station; and, that he be available to gardaí by mobile phone at all times.

Mr O’Donoghue was remanded to appear in court again on September 13th next, to receive further directions in the case from the Director of Public Prosecutions.