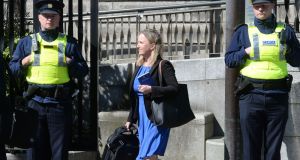 Former journalist Gemma O’Doherty could face further criminal charges arising out of an incident on a footbridge in Kilmacanogue, Co Wicklow last month.

Ms O’Doherty, an anti-immigration campaigner who has been opposing restrictions introduced to combat Covid-19, was arrested on August 28th last on public order charges in relation to the erection of banners on the pedestrian bridge over the N11 Dublin-Wexford road.

Gardaí received a number of complaints about the banners, which contained anti-facemask and anti-vaccination messages, and decided to remove them after observing motorists swerving as a result of being distracted by the signs.

Ms O’Doherty (52) is charged with engaging in threatening and abusive behaviour with intent to provoke a breach of the peace under Section 6 of the Criminal Justice (Public Order) Act at the scene. A conviction can result in a €500 fine and/or a three month prison sentence.

The former Irish Independent journalist is also charged under Section 24 of the same legislation with refusing to provide her name and address when requested by a member of the Garda who suspected her of having committed an offence. A conviction for a Section 24 offence can result in a €500 fine and/or a six month prison sentence.

Sgt Tony Flynn told Bray District Court on Monday that gardaí­ were still awaiting direction from the Director of Public Prosecutions on whether further charges would be brought against Ms O’Doherty over the incident.

Ms O’Doherty, who was not required to attend court, remains on continuing bail. The matter is due before the court again on November 2nd.