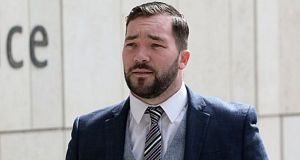 Patrick Fitzpatrick was not present in court as he was “tied up in work”, according to his solicitor. File photograph: Collins

A Fair City star who punched and bit his former partner will be sentenced in five weeks.

Patrick Fitzpatrick (33) who played Carrigstown villain Zumo Bishop for six years in the RTÉ television soap, has complied with a court order made earlier to pay a total of €2,000 to his former partner.

He noted that a restorative justice report indicated Fitzpatrick was “hugely positive”. But he said the case would have to go back before Judge Lindsay who had heard facts of the case at an earlier stage.

The actor was not present in court and defence solicitor Philip Hannon said his client was “tied up in work”. An updated probation report has also been furnished.

The actor has pleaded guilty to assault causing harm to Theresa Gannon at his home at Hollytree Terrace, Ballymun, on September 4th, 2015. The charge is under section 3 of the Non Fatal Offences Against the Person Act. The offence, at District Court level, can carry a sentence of up to one year.

At an earlier hearing, Garda Niall Carolan had told Judge Lindsay that Fitzpatrick bit the woman’s upper arm but did not break skin. He has also said the actor then punched her twice on the side of her jaw.