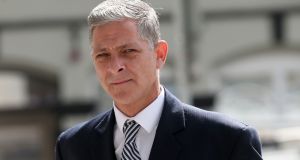 A Dublin man is the owner of a boat he is accused of stealing during an alleged drunken chase along the River Liffey, a court heard on Thursday.

Emergency services were alerted to an incident at about 6am on June 1st when a boat was taken from its mooring at a south Dublin bank sailing club.

Following a pursuit on the Liffey, a boat was brought to a halt and, later, two Dublin men were arrested and taken to Irishtown Garda station.

Brian Stacey (44), of Derry Drive, Crumlin and Ronan Stephens, (40), of Captain’s Road, Crumlin, face seven charges under the Maritime Safety Act, the Theft and Fraud Act and the Public Order Act in connection with the alleged incident.

They appeared before Judge Michael Walsh at Dublin District Court on June 1st and were granted bail providing they do not take part in any boating activities on the Liffey unless with the approval in writing of gardaí and the Dublin harbour master.

They are accused of being under influence of alcohol and failing to stop for gardaí at Poolbeg Yacht and Boat Club while being the operator of a boat, theft of a pleasure craft worth €11,000, navigating the craft without due care and attention and endangerment of a RNLI lifeboat crew at the shipping lane on the River Liffey, trespassing at Poolbeg Yacht and Boat Club and breach of the peace.

The pair appeared again at the District Court on Thursday when Garda Paul Moody asked Judge Michael Walsh for an eight-week adjournment to get directions from the Director of Public Prosecutions.

Judge Walsh ordered the pair to appear again on a date in September.

Solicitor Michael Kelleher, for Mr Stacey, said he intends to write to the DPP because his client is the owner of the boat and has a receipt. Judge Walsh agreed to remove a bail condition banning Mr Stacey from the Liffey without getting permission from gardaí and the harbour master.