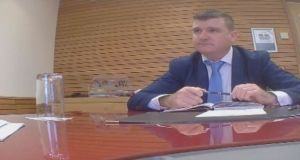 Cllr John O’Donnell from Donegal filmed in a meeting with an undercover RTÉ reporter. A court was told on that the politician had failed to make any payments despite several previous court appearances. Photograph: RTÉ

A judge has warned a politician who appeared in a controversial RTÉ Investigates programme to appear in court next month or face arrest over a long-running failure to pay compensation to a woman injured on a building site.

The politician was at the centre of controversy last month when he appeared on an RTÉ Investigates programme in which he appeared to ask for cash for political favours. He has denied the allegations.

Ms Kucklick’s barrister Laura O’Reilly, representing the Legal Aid Board, said her client had been awarded personal injury compensation in 2008 and Mr O’Donnell had failed to pay any of the award.

The judgment related to an incident in 2000 in which Mr O’Donnell had driven over Ms Kucklick’s foot at a building site in the county.

Ms O’Reilly told District Judge Paul Kelly that there was now €33,000 in arrears and Mr O’Donnell, from Larganreagh, Downings, had failed to make any payments despite several previous court appearances.

She said the case had been adjourned in 2014 with liberty to re-enter and Ms Kucklick was now pursuing the case again.

Mr O’Donnell’s solicitor Kevin McElhinney said his client had only received papers in the case before Christmas. He had provided a statement of means in November 2014 and was not in a position to pay anything to Ms Kucklick.

However, Ms O’Reilly said Mr O’Donnell had consistently failed to comply with an instalment order and had failed to provide details of his Northern Ireland bank accounts.

She said euro bank accounts provided to her client had shown Mr O’Donnell was collecting substantial rents on properties.

Mr McElhinney said the assets referred to in previous correspondence had debts over them, with one property worth €130,000 with a debt of €180,000.

Ms O’Reilly said Mr O’Donnell’s bank statements showed rents coming in and no mortgages on the properties going out. She asked the judge to issue a bench warrant for his arrest.

District Judge Paul Kelly was told Mr O’Donnell was not in court as he was out of the country. The judge ordered that he provide answers to all questions raised in court on Wednesday by Ms O’Reilly.

He adjourned the case pre-emptory against Mr O’Donnell until February 3rd.

“Explain to Mr O’Donnell if he is not in court the next time, I will issue a warrant for his arrest,” the judge told Mr McElhinney.