Court could not be sure “the people at whom the direction was directed”, could hear it 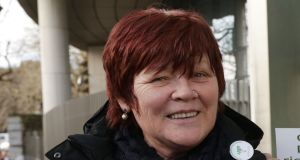 Independent TD Joan Collins outside Dublin District Court yesterday after charges over a water protest against her and eight others were dismissed. photograph: collins

Independent TD Joan Collins and eight others, who were charged with failing to comply with a garda’s direction during an anti-water meter protest.

Dublin District Court judge Aeneas McCarthy said there was a constitutional right to peaceful protest, and the State had to negate that right with evidence.

The judge said there was “a lot of noise and commotion” at the protest in the vicinity of Parnell Road, Harold’s Cross on April 25th, last year.

When Sgt David Lynch gave a direction to the protesters to leave the scene, the judge said “he did not use any instrument to project his voice”. The court could not be sure the people at whom the order was directed could hear it.

Speaking after the verdict, Ms Collins said she was very relieved. They had won the right to protest effectively in their communities, she said.

“I really believe that we have drawn a line in the sand, and hopefully people in the future will go out and defend their communities in the best way they can, in a peaceful effective way,” she said.

The Dublin South-Central TD said it was a disgrace the case was taken and a waste of time and resources. There was never a case to answer, she said, and video evidence showed protesters had not been aggressive or violent in any way.

Judge McCarthy said there was no evidence Ms Collins had breached section 6 of the Public Order Act, and no evidence she was part of a group to breach the peace.

There was a mob and some people who abused gardaí, the judge said, but that did not apply to Ms Collins.

He said he did not believe the State had established a prima facia case against Ms Collins beyond a reasonable doubt. He acceded to applications from lawyers for eight other defendants, to dismiss cases against them on similar grounds.

Ms Collins and 10 others had been accused of failing to comply with a garda’s direction to leave the vicinity. Two of Ms Collins’s co-defendants, Edel Kenny (39) of Monasterboice Road, Crumlin, and Sofian Murphy (29), from Dolphin Road, Drimnagh, faced additional charges for obstructing gardaí. These were also dismissed.

A warrant remains outstanding for Aaron Healy (25) from Saul Road, Crumlin, who did not appear in court to face the charge against him.