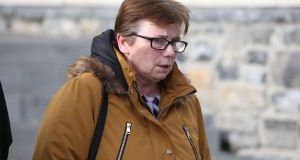 A handyman has had a charge of refurbishing a bathroom in order to conceal evidence of the alleged murder of retired grandmother Patricia O’Connor withdrawn from a Central Criminal Court jury by direction of the trial judge.

Also on Friday, the mother of murder accused Kieran Greene told his trial her son was assessed when he was in primary school and found to be “two-and-a-half years behind”. She said he had no previous girlfriends before meeting his former partner Louise O’Connor.

Mr Justice Paul McDermott told the jury on Friday that he was “withdrawing” one of the two counts from them as a result of legal argument.

The judge said the jury were “no longer engaged” in the decision-making role in relation to one of the counts against Keith Johnston and said “the state of play” in relation to the remaining counts on the indictment against each of the accused were the same.

Mr Johnston (43), of Avonbeg Gardens, Tallaght, Dublin 24 is charged with impeding the apprehension or prosecution of Kieran Greene, knowing or believing him to have committed an arrestable offence, to wit the murder of Mrs O’Connor (61) on May 29th, 2017.

Mr Justice McDermott said he was withdrawing the first charge against Mr Johnston, where he was accused of engaging in the refurbishment of a bathroom at Mountainview Park, Rathfarnham, Dublin 14 between May 31st, 2017 and June 9th, 2017, in order to destroy or conceal any evidence relating to the murder of Mrs O’Connor.

Mr Johnston remains on trial in relation to the charge that he allegedly assisted Mr Greene in the purchase of various implements at Woodie’s, Mr Price, B&Q and Shoe Zone, Tallaght, Dublin 24 on June 9th, 2017, which were to be used in the concealment of the remains of Mrs O’Connor. He denies this charge.

It is the State’s case against Mr Johnston that Mrs O’Connor was already lying dead in a shallow grave in Wexford but not yet dismembered when he assisted Mr Greene in purchasing various DIY items.

The trial has heard that the body of Mrs O’Connor was dismembered into 15 separate parts that were found in the Dublin and Wicklow mountains between June 10th and 14th, 2017.

The mother of Mr Greene, Joan Greene, gave evidence in her son’s defence on Friday afternoon.

Father-of-three Mr Greene (35) has pleaded not guilty to murdering Mrs O’Connor at her home in Mountainview Park, Rathfarnham, Dublin 14 on May 29th, 2017. Mr Greene is the former partner of Louise O’Connor and father to three of her five children.

Mrs Greene said her son was assessed when he was about seven years old. It was found that he was about “two and a half years behind”, she said.

The witness told defence counsel Conor Devally SC her son was taken out of class and got extra one-to-one tutoring for a lot of subjects.

Mrs Greene said she was invited to be a guardian, were it necessary, to Louise and Mr Greene’s three children in September 2017. Mrs Greene agreed with Mr Devally that this was in the eventuality that her son or Louise were not able to discharge their parental roles.

In cross-examination, Mrs Greene told James Dwyer SC, for Keith Johnston, that her son had gone into custody in June 2017 and she had spoken to him while visiting him in prison. She agreed with Mr Dwyer that her son’s health had deteriorated “a little” while in custody saying: “I was a bit concerned and I was told they put him on some medications, that’s all I knew.”

Mr Justice McDermott told the jury that the next stage of the trial would be closing speeches by barristers for the prosecution and defence. “This will require you listening to five closing speeches and you will have to listen to me for a considerable period of time as well,” he pointed out.

He told the jurors to return on Monday afternoon for the next phase of the trial and asked them not to discuss the case with anyone.

The deceased’s daughter Louise O’Connor (41) and granddaughter Stephanie O’Connor (22), both of Millmount Court, Dundrum Road, Dublin 14, and Louise O’Connor’s ex-partner Keith Johnston (43), of Avonbeg Gardens, Tallaght, Dublin 24 are all charged with impeding the apprehension or prosecution of Mr Greene, knowing or believing him to have committed an arrestable offence, to wit the murder of Patricia O’Connor on May 29, 2017.