Dmitry Hrynkevich was killed during drunken fight and ‘his life was as tragic as his death’, court told 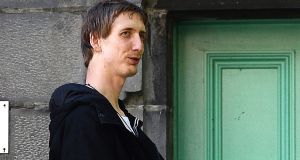 Dmitry Hrynkevich did his best to integrate when he came to Ireland as a 10 year old and became widely liked for his humour and generosity.

The mother of a 7ft 5in (2.26m) Belarussian man who was killed during a drunken fight has said her son was picked on all his life due to his height and died as tragically as he lived.

Elena Moram wrote a statement to the Central Criminal Court which was read at a sentence hearing on Thursday for 33-year-old Arnoldas Ivanauskas who was found guilty of manslaughter last month for killing her son Dmitry Hrynkevich (24).

Ms Moram said she wanted to be a voice for her son and told the court that Dmitry’s father died when Dmitry was five years old. She said: “I fought for him like a lion. Against sickness and social difficulties as a result of his unusual height.”

He was diagnosed with Marfan Syndrome, which caused his limbs to become elongated, and despite suffering continuous pain, blindness and other illnesses he “showed courage and kindness”, she said.

He did his best to integrate when he came to Ireland as a 10 year old and became widely liked for his humour and generosity. When he was aged 18, knowing that his diagnosis meant he might not live a long life, he volunteered to be an organ donor. When he died his organs were donated.

Ms Moram added: “To the last day of his life he donated money to charity and performed good deeds that he never boasted about.” However, her son was, she said, “a freak in the eyes of society because of his height”. He was picked on and singled out, she said, adding: “Life was generally disappointing for him. In many ways his life was as tragic as his death.”

Mr Hyrnkevich died at Kerry General Hospital on October 2nd, 2015 two days after being found at a house at Killeen Woods, Tralee, Co Kerry with multiple injuries to his head, face and neck. Lithuanian native Ivanauskas, of The Parklands, Tralee, was charged with murdering Mr Hrynkevich but a jury unanimously acquitted him of that charge and found him guilty of manslaughter. In garda interviews the accused said a second man, who was not before the court, attacked Mr Hrynkevich and that he “joined in”, punching the deceased at least once on the side of the head.

His barrister Mark Nicholas SC told the court that the jury had found his client guilty of an “assault to manslaughter” meaning that he did not intend to cause serious injury to the deceased but intended to cause something more than a trivial injury.

The court heard that the victim had previously undergone two major surgeries to correct a cardiac problem caused by his illness. He had his aorta replaced in a successful operation but despite this, he was considered to have an increased risk of sudden collapse.

His death was caused by loss of oxygen to the brain, due to a heart attack linked to Marfan syndrome, a postmortem concluded. The autopsy, carried out by retired State pathologist Prof Marie Cassidy found that “blunt force trauma” to the deceased’s head contributed to his death.

Roisin Lacey SC for the prosecution said the offence lies in the medium culpability range and should therefore carry a sentence of between four to ten years. She said the aggravating factors in the case put it at the higher end of that category.

Mr Nicholas said his client had cooperated with gardai and didn’t attempt to blame the deceased or “play up” the fact that Mr Hyrenkevich had slapped him three times in the face. He was in full time employment at the time of the offence and was a fully engaged member of society, counsel said. Since going into custody in 2018 his record has been “excellent”, counsel said, leading him to gain enhanced status in Wheatfield Prison.

The court also heard from Detective Sergeant James Hurley who said that Mr Ivanauskas has previous convictions in Ireland for intoxication in a public place and criminal damage, both dealt with at the District Court. In Lithuania he has convictions for robbery, theft and destruction or damage to property. Mr Justice Michael McGrath adjourned the hearing until October 23rd to allow Ms Lacey to inquire about the details of a further offence committed in Lithuania.