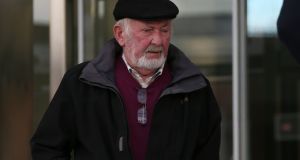 Seamus O’Mahony, brother of the late Anthony O’Mahony, leaving the Central Criminal Court in Dublin on Monday after the sentence hearing of Michael Ferris (63) was adjourned. Photograph: Collins Courts

The manner in which the good character of a farmer, who was killed when a neighbour drove the prongs of a teleporter into him, was “shredded” during trial was “even more harrowing” than hearing the “grotesque details” of how his life ended, the victim’s brother has said.

“Every story has two sides and there was only one side of the story told during this trial,” Seamus O’Mahony told the Central Criminal Court in a victim impact statement on Monday, adding that his brother was not there to defend his “good name”.

A jury sitting in Tralee last month found dairy farmer Michael Ferris (63) not guilty of murder but guilty of the manslaughter of his neighbour Anthony O’Mahony (73) by a majority verdict of 10 to two.

The victim’s brother said today that his family now “live in fear” knowing that Ferris will be released from prison some day and they will have to pass each other again on that “small country road”.

“He (Ferris) said he snapped once. What is to stop him snapping again and doing something similar?”

The man said the deceased’s family have felt “totally cut off and isolated” in their north Kerry community since the trial, with people “too afraid” to speak to them about the legal proceedings.

“People will remember my brother the way he was depicted in the trial and this hurts us greatly,” he said.

The testimony was heard as part of a victim impact statement read by the deceased’s nephew on behalf of his father Seamus O’Mahony, brother of Anthony O’Mahony, during Michael Ferris’ sentence hearing on Monday.

The two-week trial, which ended last month, heard evidence that tillage farmer Anthony O’ Mahony suffered “catastrophic injuries” after he was repeatedly stabbed with the prongs of the teleporter while he sat in his car.

Mr O’Mahony said that his brother did not “stand a chance” when the heavy industrial machine was driven into his car that morning by Ferris and he was “totally ambushed in an intentional act that had been premeditated as outlined during the trial”.

“Ferris admitted that he parked the teleporter to stop Anthony from coming down the road and he intentionally drove the teleporter at Anthony’s car. The last thing Anthony saw were the forks of that teleporter being driven at him and I cannot get that image out of my head,” added Mr O’Mahony.

Ferris of Rattoo, Ballyduff, Co Kerry, had denied murdering neighbouring land owner Anthony O’Mahony over the use of a crow-banger for scaring birds at Rattoo on the morning of April 4, 2017. The trial was told that the noise from it “would wake the dead”.

Brendan Grehan SC, defending bachelor farmer Ferris, said in his closing speech last month to the jury of seven men and five women that he made no apology for speaking ill of the dead, which was not a normal thing to do but the community in Rattoo was being “oppressed” by Mr Mahony and living in fear of a “totally unreasonable person”.

The defence argued that there had been cumulative provocation because of the behaviour of the deceased and the fair and just verdict would be manslaughter. Mr Grehan said that Ferris was a good man who did a bad thing.

Seamus O’Mahony, the deceased’s younger brother, said in his victim impact statement that this was “the most horrendous ordeal” their family had ever experienced and they will never recover from it. Words could not describe how they are feeling, he said.

“First, we lost a brother, an uncle and a friend, in the most horrific way imaginable, then, we had to endure a two-week trial, which has devastated my family. As difficult as it was to hear the grotesque details of how Anthony’s life was ended on the morning of April 4th 2017 in Rattoo, the way his good character was shredded during the trial was even more harrowing and emotionally stressful,” he said.

“Every story has two sides, and there was only one side of the story told during this trial. Anthony was not there to defend his good name and we were not given a fair opportunity to show what kind of a man he truly was.”

Mr O’Mahony said it was printed in the media during the trial in Tralee that Anthony’s neighbours were living in fear. “We have had some of his closest neighbours to where we were raised and where he lived all his life, visit us since the trial to say how hurt they felt by these comments. There are so many people in the community in Ballyduff that have only good things to say about Anthony.

“However, this side of the story was never given during the trial and it distresses me so much,” he remarked.

Mr O’ Mahony said Anthony was his “big brother”, the eldest in the family and they grew up on a small farm. There were “close siblings” throughout life, he said, and worked closely together “right up until his unlawful killing”.

Mr O’Mahony said his brother was decent and honest, a good, kind and caring man and he would never have physically hurt anyone, despite how he may have been portrayed during the trial.

Mr O’Mahony said they bought the farm in Rattoo in 1984 and it was an “exciting and challenging time” for them.

“We got great pleasure out of working together and running a successful vegetable business. We created valuable employment for so many families in the community during the 1980s and 1990s, when there was very little other job prospects in the area,” he said.

“We spent many happy years working the lands in Rattoo. My young children spent all their summer holidays from school working there packaging vegetables with us and I have warm and happy memories of that time. Now, when I visit the farm, I have a dark feeling, a feeling of dread, fear and anxiety.

“It will never be the same for us to farm there now,” he commented.

Mr O’Mahony said the last time he saw his brother Anthony was on Saturday, April 2nd 2017. “My son and I had gone to Rattoo to prepare the plough to till the remaining land for sowing that year. Anthony arrived down and told us he was going to turn the banger on.

“I knew there was an issue about the banger with some neighbours in Rattoo but we did not know the extent of their anger. One of the things that hurt us most is that they never approached me about it. It all could have been avoided if they had come to me directly, we could have come to some peaceful arrangement.”

The man said that to be killed over a crow banger, an implement that is so commonly used by farmers throughout Ireland, “just beggar’s belief”.

Mr O’Mahony said he and his son continue to farm the land in Rattoo, where his brother was killed and in order to travel there they have to pass by the scene where “his life was ended so savagely”.

“It is hard to explain the list of emotions I feel every time I have to do this. It will never be the same for us and we will never recover from this.”

In conclusion, Mr O’Mahony said the defendant has never once expressed any remorse since he took his brother’s life or at any point to them as a family. “Never once has he or his family apologised for his actions. That speaks for itself really,” he said.

A second victim impact statement was read to the court by Mr O’Mahony’s niece on behalf of her mother, Angela Houlihan, who is Mr O’Mahony’s sister.

“A sudden death is hard to cope with, an accident is devastating but what happened on that morning is something we will never come to terms with,” she said.

“Anthony had farmed in many locations over the years and there was never an issue with neighbours or crow bangers. He must be the only man who was killed over one of these,” she added.

Both witnesses sobbed as they reading their individual victim impact statements on behalf of their respective parents.

Mr Grehan submitted to the court that the jury’s verdict of manslaughter must be respected and the sentence imposed must be consistent with the verdict which was brought back by the jury.

In mitigating factors, Mr Grehan asked the court to consider that his client will be 64 years of age in January and had a hard-working ethic and therefore he came before the court to be sentenced with an “unblemished character”.

The barrister told the judge that he was not handing in any testimonials to the court as that would be “superfluous” to what the court heard during the trial.

Mr Grehan said that his client had asked him to express his remorse and sorrow for his actions that day as well as the death of Mr O’Mahony. “Mr Ferris did not want this opportunity to go by without conveying these sentiments,” he added.

The first thing Ferris did after this happened was go to his neighbours for them to call the emergency services, Mr Grehan said, adding that his client never took up bail as he realised he could not go back to where he was living in Rattoo at the time because of garda concerns.

Ms Justice Carmel Stewart expressed her sympathies to Mr O’Mahony’s family and remanded Ferris in custody until December 3rd when he will be sentenced.