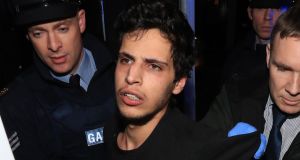 A 20-year-old man has pleaded not guilty by reason of insanity to murdering a Japanese national in Dundalk nearly two years ago.

Addressing the jury panel on Monday morning, Mr Justice Michael White said they would hear one of the charges read out against Mr Morei.

Wearing a white shirt and black suit, Mr Morei stood up when arraigned before the Central Criminal Court.

When the registrar read the indictment to the accused and asked him how he was pleading, he replied: “Not guilty by reason of insanity”.

The defendant had the help of an interpreter for the arraignment proceedings.

A jury of seven men and five women was sworn in to hear the trial, which is due to begin on Tuesay afternoon before Ms Justice Carmel Stewart and is expected to last up to two days.

Mr Justice White told the jury that the facts of the offence are not in dispute and they would be summarised by Detective Inspector Martin Beggy of Dundalk Garda Station. “The evidence in dispute is in relation to sanity and insanity,” he said.

The judge informed the jury that two consultant forensic psychiatrists from the Central Mental Hospital will give evidence in the case.