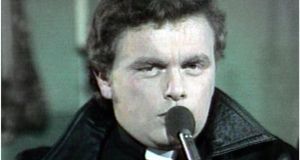 Anthony Walsh (62) committed the offence and two other rapes of the same victim before the Criminal Law (Rape) Amendment Act came into effect in 1990, meaning that the maximum penalty the judge can impose on each offence is two years. File photograph: Bryan O’Brien

Former “singing” priest Tony Walsh faces a maximum sentence of two years in prison for raping a boy with a crucifix, a court has heard.

Anthony Walsh (62) committed the offence and two other rapes of the same victim before the Criminal Law (Rape) Amendment Act came into effect in 1990, meaning that the maximum penalty the judge can impose on each offence is two years.

He is charged with indecent assault as that was the offence which existed at the time. He forced the child to have sex twice, once in the parochial house in his parish and on another occasion in a tunnel under the Phoenix Park. He also used a crucifix to rape the boy.

Walsh told the jury during the trial last month that he never knew the boy and said he never assaulted him.

Walsh, formerly of North Circular Road, Dublin 7 had pleaded not guilty at Dublin Circuit Criminal Court to five counts of indecently assaulting the boy on dates between January 1980 and December 1982. The boy was aged between 10 and 13 years old at the time of the abuse.

The jury of two women and ten men returned verdicts of guilty on all counts after approximately one hour of deliberation following a three day trial.

On Monday Garda Tara Corrigan told Fiona McGowan BL, prosecuting, that Walsh has 17 previous convictions, from 1995 to 2015, for indecently assaulting young boys and one girl.

Walsh fought two trials and pleaded guilty to the other offences. He is currently serving a sentence and is not due for release until 2021.

Mr O’Loughlin submitted that, as the victim had made a statement to gardaí in April 2011, it could have been dealt with the same time as Walsh’s most recent case in 2015. He suggested to Judge Sheahan that there was likelihood that the judge would have imposed a concurrent term and not extended Walsh’s term of imprisonment if this happened.

During the trial Walsh told the jury that his offending in relation to children started in 1980 and continued to 1986. He said a number of the children told their families what was happening and he was called in by the Archbishop in 1986.

He said he was sent for six months treatment in the UK and on his return home he was made a hospital chaplain.

He said he first came to garda attention in 1995 in relation to one incident. In 1997 he pleaded guilty to offences involving five boys in the period 1980 to 1986. Asked why he pleaded, Walsh replied “because I was guilty”.

He was sent to prison for ten years initially and this was reduced to six years on appeal. He was released in 2002.

He said that in 2002, four months after his release “like a bolt out of the blue” he was featured on the TV program “Cardinal Sins.”

“I was stunned because I had served my time” he told the court. “There was no re-offending whatsoever and suddenly I was back into the law and the courts.”