Denials of complaints against him ‘incoherent, confused and made very, very little sense’ 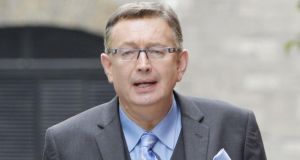 Solicitor Gerald Kean: his barrister argued that there was no conduct of a disgraceful or morally culpable nature, or any gross negligence on his part. Photograph: Alan Betson/The irish Times

Solicitor Gerald Kean made “elaborate and increasingly desperate” efforts over months to cover up his alleged failures in dealing with a client’s case, the Law Society has told the High Court. The society regarded this matter as on the higher end of the scale of professional misconduct, Remy Farrell SC said. Mr Kean’s denial of complaints made against him by former client Christopher O’Neill was “incoherent, confused and made very, very little sense”, he added.

Mr Remy was opposing Mr Kean’s appeal against the solicitors disciplinary tribunal’s findings that aspects of Mr Kean’s handling of Mr O’Neill’s case involved professional misconduct at the higher end of the scale, justifying a fine of €20,000.

Mr Kean’s initial misconduct in his handling of the proceedings brought by Mr O’Neill, Drumsna, Co Leitrim, may have been due to negligence and oversight, but of most concern to the society were his efforts over months to cover that up, Mr Farrell added. Honesty “is one of the core values of the solicitors profession”.

While Mr Kean had described as “relatively trivial” the sum of money involved – a judgment for €1,048 entered in 2005 against Mr O’Neill, later paid off by Mr Kean, who was reimbursed by Mr O’Neill – this was not about the amount but issues “going to the very heart of the relationship between solicitor and client”.

It was “extraordinary” and “truly, truly strange” there were no documents to support Mr Kean’s claims he had had agreements with Mr O’Neill and other clients to pay off judgments against them for which he would be reimbursed later. Fiona Gallagher, for Mr Kean, argued there was insufficient evidence before the tribunal to support the finding of professional misconduct. There was no conduct of a disgraceful or morally culpable nature, or any gross negligence on the part of Mr Kean and it was his case there must be such a finding of professional misconduct could be made.

By the end of the hearing, it was evident Mr O’Neill disliked Mr Kean despite his insistence he was not acting out of spite, she added. The tribunal failed to take that into account, she argued, as well as Mr Kean’s unblemished record over 30 years.