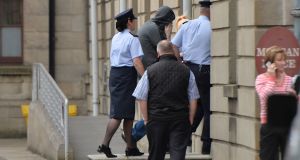 Eric Eoin Marques, accused by FBI agent of being the largest facilitator of child pornography in the world, is escorted intothe Four Courts for an earlier hearing. Photograph: Alan Betson

The Court of Appeal has dismissed a challenge by a man accused of being the world’s biggest facilitator of child pornography aimed at halting his extradition to the United States.

The FBI believes he is the owner and administrator of an anonymous hosting site known as Freedom Hosting.

He was arrested by gardaí in 2013 on foot of a formal request from the US.

Mr Marques has brought a number of separate but related actions against his proposed extradition including a challenge against the DPP’s decision not to prosecute him in Ireland for offences he is wanted for by the US authorities.

His challenge against that the decision, was also dismissed.

In 2017 he brought fresh proceedings aimed at halting his extradition to the US.

His lawyers argued the Minister for Justice needed to know the reasons why the DPP decided not to prosecute before the Minister can properly exercise his discretion before making an order for Mr Marques’s surrender.

The court was also asked to determine if the reasons given by Minister in a decision made in June 2017 ordering Mr Marques’s extradition were adequate.

His application was dismissed by the High Court last November, and he appealed that ruling to the Court of Appeal.

The Minister opposed the application.

Noting that while “extradition is a process of international cooperation in the criminal sphere between sovereign states,” it was not a criminal proceeding” and involves “no finding of guilt or innocence.”

The Judge said Mr Marques had no entitlement to require the Minister to obtain from the DPP the reasons for deciding not to prosecute him in Ireland.

The court was also satisfied that the reasons given by the Minister to allow Mr Marques’s extradition proceed were clear.

Nothing more was required to be explained in regard to that decision, the judge added.

In all the circumstances, the judge said the court was satsified to dismiss the appeal.

The case will return before the court on Friday when lawyers for Mr Marques may seek to have the case appealed to the Supreme Court.

The charges against Mr Marques, with an address at Mountjoy Square, Dublin 1, relate to images on more than 100 “anonymous websites” described as being extremely violent, graphic and depicting the rape and torture of pre-pubescent children.

The High Court ordered his extradition, which Mr Marques opposed, in December 2015.

His appeal against that order was dismissed in 2016 by the Court of Appeal.