US tourist died after choking on food at Trump Doonbeg resort, inquest finds 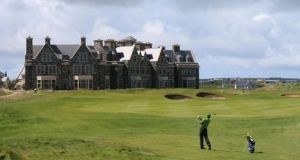 The woman was having a meal with her daughter at the Trump Doonbeg resort in Co Clare (above) when she collapsed and died, an inquest has heard. File photograph: PA

An 82-year-old US tourist on a long dreamed of trip to Ireland choked to death on a piece of food while having a meal at the Trump Doonbeg resort in Co Clare, an inquest has heard.

Clare County Coroner, Isobel O’Dea found Janet Buchebner died of asphyxiation secondary to choking on a piece of food in the dining room at the resort on May 25th last.

Ms Buchebner of Country Club Drive, Destin, Florida was having a meal with her daughter, Jeannie McGee, at the time.

The inquest heard she collapsed and died despite the best efforts of three off-duty doctors and Trump Doonbeg staff on the evening in question.

“Everything that could have been done was done. We were fortunate that there were three medics on hand and every possible assistance was given to Ms Buchebner by staff as well,” Ms O’Dea said.

In her deposition Máiréad Flynn, assistant manager at Trump Doonbeg, said she was alerted to come to the dining room at about 7.30pm.

Local man Tony Pender had been talking to Ms Buchebner and her daughter at their table. He came to her and said: “Call an ambulance - that woman is not well”.

In his evidence, Mr Pender said: “I noticed Janet was having difficulties. I knew by her face that she was in distress. She wasn’t coughing - she just leaned over.”

Ms McGee said her mother had a history of heart problems and was prescribed antibiotics for a chest infection 10 days previously at Castlemartyr, Co Cork. Her mother was not feeling well on the date in question, she said in her deposition.

Shannon GP, Dr Peter Flynn was in an adjacent lounge with his wife Dr Gwen Murray and Dr Ciarán Hughes. He was told by staff that a guest had collapsed in the dining room.

“When I went to see her, the woman was unresponsive and had no pulse,” he said.

Despite their efforts, she was pronounced dead at 8pm.

A postmortem carried on May 29th at University Hospital Limerick found the woman’s larynx was blocked by food as was the oesophagus. The post mortem found cause of death was asphyxiation secondary to choking.

A US obituary reported the great-grandmother of five died “while on a long dreamed trip to see her family’s heritage”.