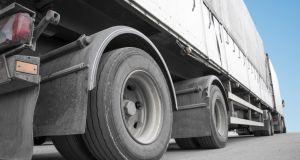 A 39-year-old mechanic died after he a truck tyre he was inflating exploded, an inquest heard.

Mariusz Cwenar, a father of theree originally from Poland but living at Rosebank Place in Clondalkin, Dublin 22, was employed as a mechanic at Emerald Truck and Van Ltd at Greenogue Business Park in Rathcoole, Co Dublin.

An inquest into his death heard Mr Cwenar was fatally injured when a truck tyre he was inflating exploded on October 23rd, 2014. He was thrown into the air by the blast, the court heard.

“I heard a loud bang and I glanced down and saw a body flying through the air, approximately one metre off the ground,” said Pat McDonell , Product and Support Manager at Emerald Truck and Van.

Mr Cwenar had been blown clear of the tyre but it landed on his leg, according to another employee.

Mr Cwenar had repaired a hole in the tyre but post-accident examinations revealed a sizable split in the tyre wall, mostly likely due to the fact it had been driven while flat, the inquest heard.

“It’s always a dangerous to inflate a truck tyre because of sheer forces involved. Ordinarily you would not inflate a tyre that has been compromised but damage is not always obvious,” Health and Safety Inspector Martina O’Kearney Flynn said.

Mr Cwenar was taken to Tallaght Hospital at 1.30pm. He was attended by the hospital trauma team but was pronounced dead at 3.05pm.

He sustained multiple internal injuries to the thorax and abdomen, an acute liver laceration and a neck injury. The cause of death was multiple injuries due to blunt force trauma or blast injury as a result of a pneumatic tyre blow out whilst being inflated.

Dublin Coroner’s Court heard it was not normal practice for Emerald Truck and Van mechanics to repair tyres and Mr Cwenar had been advised not to repair this particular tyre by his supervisor.

Tyre repairs are subcontracted but carried out on-site by another firm, Emerald Supervisor Enda Murphy said.

Asked why Mr Cwenar might have repaired the tyre, Mr Murphy suggested that he may have been trying to be helpful. “Maybe he thought he was doing a good turn?” he said.

New safety procedures have been put in place since the incident, Mr Murphy told the court.

The jury returned a verdict of death by misadventure and made an industry-wide recommendation that safety measures be reviewed where compressed air is used to inflate HGV tyres.