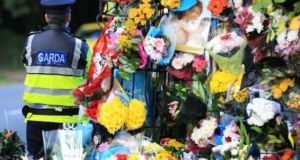 The scene at the site of the fire that claimed 10 lives in Carrickmines in 2015. File photograph: Nick Bradshaw

Inquests into the deaths of 10 victims of a fire at a Dublin halting site are scheduled to begin on Monday.

Five adults, five children and an unborn baby died following the fire at the Glenamuck halting site in Carrickmines, Dublin 24 in the early hours of October 10th, 2015.

The 10 victims of the blaze died due to carbon monoxide poisoning.

The inquests are due to be heard at Dublin Coroner’s Court from Monday, January 14th and are scheduled to continue for up to two weeks.

The victims were Thomas Connors (27) his wife Sylvia (30) and their children Jim (five), Christy (three) and six-month-old Mary. Willie Lynch (25) and his partner Tara Gilbert (27) who was pregnant, and their daughters Jodie (nine) and Kelsey (four) also perished. Jimmy Lynch (39) a brother of Willy, also died in the blaze. The victims were residents of Glenamuck Halting site in Carrickmines, Dublin 24.

Previously, the Coroner’s Court heard that no criminal charges will be brought in relation to the deaths of 10 fire victims. The Director of Public Prosecutions made this decision following the submission of a case file on the tragic blaze by an Garda Siochana.

Evidence from pathology staff who conducted postmortem examinations, will also be heard.

The cause of death returned for all 10 victims of the blaze was acute carbon monoxide poisoning due to smoke inhalation due to a fire.