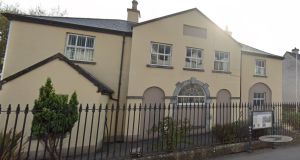 An inquest into the death of a 17-year-old Leaving Certificate student who died 10 days after allegedly being admitted to a Covid-19 ward of Mayo University Hospital was abandoned on Monday after a man refused to identify himself and disobeyed the instructions of the coroner to leave the courtroom.

Prior to the scheduled start of the inquest into death of Sally Maaz, Ballyhaunis, Co Mayo, at Ballina Courthouse, coroner Patrick O’Connor noted there were more than the 14 people allowed in the courtroom under Covid regulations.

A man at the rear of the court refused to identify himself and was asked to leave by the coroner.

“I am a member of the public. I do not wish to give my name,” the man stated. He was then asked by Mr O’Connor and gardaí to leave the courtroom but he refused. Others accompanying him protested it was “unlawful” to be asked to leave a public hearing.

One of the group, who identified herself as Jemima Burke, was warned she would also be removed from the hearing and was told to wear a face mask.

“We have every right to be here,” she said. At one point, gardaí warned a woman who was filming on her mobile phone to desist.

After a break of about three-quarters of an hour, the coroner reconvened. He said everyone had a right to attend a public hearing but added that in the midst of the Covid pandemic, a serious health issue, indoor gatherings were limited to 14 and what happened was in breach of the guidelines.

Mr O’Connor said his main concern was for the Maaz family, who were grieving the loss of their loved one.

“It is the privacy and integrity and the interests of their daughter that must be given priority,” the coroner continued. “Others may have their own agenda.”

The coroner then said he was “not prepared for people’s health to be endangered or the public guidelines to be flouted” and adjourned the preliminary hearing to December 16th.

Following the death of Sally Maaz in April, her parents questioned the circumstances surrounding her death at Mayo University Hospital.

Abdullah and Rula Maaz said their daughter, who was born with a congenital heart defect, was admitted to the hospital’s Covid-19 ward 10 days before she died. The couple, part of the extensive Syrian community in Ballyhaunis, said she was admitted to the Covid ward even though she had tested negative for coronavirus. However, according to family, she tested positive before she died.