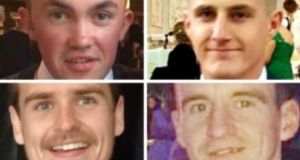 Four friends were killed after their car left a narrow road and shot more than 20m into a field in Co Donegal, an inquest has heard.

John Harley, Shaun Harkin, Mícheál Roarty and Daniel Scott all died when the Toyota Corolla they were travelling in crashed at Gleannhulaigh near Magheraroarty on January 27th, 2019.

All four had been drinking together in Dixon’s Bar in Magheraroarty.

However, some time after 8.30pm the men left in Daniel Scott’s car.

Just minutes later the car clipped a grass verge and flew 23m into a field.

The car was extensively damaged on impact as it landed on its roof.

Pathologist Dr Katrina Dillon gave details of the postmortems of the men and told how all four of them suffered serious head injuries which had ultimately caused their deaths.

Families of the four young men, who were hugely respected in their local communities, sat and hugged each other during the distressing evidence at Letterkenny Courthouse.

The court was told that all four men were intoxicated.

He told how measurements indicated that the car was travelling at a speed of 120km/h on a road governed by an 80km/h speed limit.

The weather was not a factor, the road was in good condition and the car was also in a good serviceable condition at the time of the accident, he added.

He said there was no time to correct the swerve in the car when it happened.

The court was told that two of the men, Michael Roarty and John Harley, were not wearing seat belts at the time of the crash.

However, coroner Dr Denis McCauley said this would not have saved the men as the impact and the nature of the crash had been so severe.

Dr Dillon said that all men were intoxicated and that the driver, Mr Scott, was six times over the limit and that cocaine was also found in his system.

Witness Seana O’Grady told the coroner’s court that she had been in Dixon’s Bar that evening and saw the four men.

After they left the bar she said she heard the revving of a car engine out the back and that another witness Adam Curran said “Oh God, why didn’t someone take the keys off them?”

She said that was the last time she saw the men.

Another witness Ivan O’Donnell told how he was first on the scene after parking his car in a driveway after it ran out of petrol.

He saw a car in the field with its lights on, with the noise of the horn constantly sounding.

Garda Shaun Sharkey told of what he saw when he arrived at the scene.He said he knew there were two bodies in the front of the car and two in the rear but was not sure if there were more casualties in the rear such was the damage caused by the impact.

He said along with the emergency services they removed the bodies from the wreckage and placed the bodies on tarpaulin sheeting and cleaned them up as best they could.

A local doctor from the NowDoc service also arrived on the scene and officially pronounced the men dead.

Members of the men’s families officially told the inquest of identifying their loved ones.

Sgt John Joe McClafferty paid tribute to all the men who perished on the night as he said he lived in the community, knew some of them well and had attended all their funerals.

He said that none of the men had ever come to Garda attention before and were from very well-respected families in the area.

He said, “This was just a terrible tragedy and it was said at the time that this was one of the darkest and saddest days in our community as four young men were snatched from us in the prime of their lives.”

He paid tribute to all who attended the scene on the night including the emergency services.

“They did all they could on the night,” he added.

His sentiments were echoed by Garda Insp Seamus McGingle who conducted the inquest on behalf of An Garda Síochána.

Coroner Dr McCauley said the inquest was not being held to apportion any blame to any of those involved in the crash but merely to find out the facts of what happened on the night.

In conclusion, he said that all four men died as a result of injuries sustained from a road traffic collision and his finding was a verdict of misadventure in each case.

He added, “This was four close friends out enjoying themselves and made a couple of decisions which had a bad, dreadful outcome.

“The boys had their lives planned out and this reinforces that this is just an awful accident which has had devastating effects.

“It has had a ripple effect on all the community and all the people here and you can just hear the devastation that it has caused.

“I want a learning process as we don’t want this to happen again and we would ask people to be careful and to understand the effect it has.”