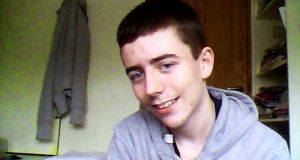 Jake McGill Lynch died at Tallaght Hospital on March 20th, 2013, as a result of a self-inflicted gunshot wound at his home at Woodford Terrace in Clondalkin, Dublin 22.

The mother of a 14 year old boy who died of a self-inflicted gunshot wound has welcomed an open verdict at an inquest into his death.

Jake McGill Lynch died at Tallaght Hospital on March 20th, 2013, as a result of a self-inflicted gunshot wound at his home at Woodford Terrace in Clondalkin, Dublin 22.

“It’s a huge relief. It allows us to grieve now. You can’t let go of that night but this allows another chapter to close. This is the verdict he deserved because in our eyes it was drug induced,” Stephanie McGill Lynch said.

She shed tears and clutched her husband’s arm as the verdict was read out at Dublin Coroner’s Court.

“Who in their right mind, if you are suffering from anxiety and dark thoughts, gives you stuff that has the same side effects? It’s the answer to everything nowadays, here’s your prescription, knock yourself out,” Mrs McGill Lynch said.

The inquest heard that Jake was diagnosed with Asperger’s Syndrome in early 2012 and he suffered from anxiety issues. He was seeing a psychologist at Clondalkin Linn Dara Child and Adolescent Mental Health Services (CAMHS) and had been prescribed Prozac to help with his anxiety. He started taking the medication 46 days before his death.

In email written 24 hours before his death, Jake said he was feeling ‘drugged’ and described how he had ‘panicked to the point of tears before some pretty big exams’ and was comforted by his mother.

“I have been telling my mother how much I hate my condition,” Jake wrote in the email.

The Coroner said Jake was obviously a talented young man and his email showed ‘his extraordinary level of intelligence.’

Consultant child psychiatrist Dr Maria Migone, who prescribed the Prozac for Jake’s anxiety, said new findings emerging in the past two years showed that children on the autistic spectrum were at increased risk of suicide.

“There is an increased risk among those with autism spectrum disorder, there is an increase in size of the part of the brain connected to emotions. If you experience strong emotions the thinking part of your brain may not be working very well,” Dr Migone said.

Mrs McGill Lynch said she was unaware of the side effects of the drug.

“We’ve never had as much money pumped into suicide prevention in this country and the statistics have never been higher, nearly all of them under mental health.

“Kids are walking around drugged out of their minds, we have a generations of zombies,” she said.

He said Prozac can lead to increased suicidal ideation in some patients, but not to increased instances of suicide.

“Flouxetine (Prozac) gave rise to suicidal ideation that rather than suicide itself. The use of fluoxetine in itself does not lead to suicide, there is no clear association,” Dr Houlihan said.

One fifth of adolescents experience suicidal thoughts, according to Dr Houlihan.

Medics at Temple Street Children’s University Hospital are treating one patient per day presenting with self inflicted injuries or threatening to self harm, he said.

About 8 per cent of children and young adults who experience suicidal ideation attempt to take their own lives, Dr Houlihan said.

“Of these it is thought 1 per cent will lead to completed suicide. It sounds small but it’s very significant,” he said.