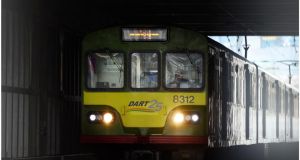 Dublin’s Dart. The companies brought judicial review proceedings arising from An Bord Pleanála issuing an order on December 14th, 2011, giving CIÉ the right to serve the companies with a notice indicating it intended to compulsorily acquire their lands for the rail extension.

A number of companies have won a High Court challenge over moves to compulsorily purchase their lands for a proposed €2.6 billion underground extension of Dublin’s Dart railway line.

The companies claimed a compulsory purchase order (CPO) issued for their lands along the East Wall to Inchicore extension line is null and void because it meant their lands were effectively frozen for seven years when there was no funding for the Dart project.

They brought judicial review proceedings arising from An Bord Pleanála issuing an order on December 14th, 2011, giving CIÉ the right to serve the companies with a notice indicating it intended to compulsorily acquire their lands for the rail extension. The companies claimed the board had misconstrued the relevant legislation in suggesting CIÉ had seven years in which to enter into a “notice to treat”. They argued it was outside its powers to provide for a period of more than 18 months.

Yesterday, Mr Justice Michael Peart, ruling on a preliminary issue over the December 2011 order, said he was satisfied the legislative scheme governing procedures for CPOs meant a seven-year period for a “notice to treat” was beyond the board’s powers. The judge said he would hear submissions in the new year as to what orders he should make to reflect his decision.

Separate actions
Two separate actions over the matter were brought against An Bord Pleanála and CIÉ. The first was by Flancrest Enterprises Ltd and the second by Goldrun Properties Ltd, AC Taylor Property Ltd, Phantom Properties Ltd and Zonda Properties Ltd. A fifth firm, Sherborough Securities Ltd, was not entitled to the orders sought as it did not have the necessary legal standing to bring such proceedings, the judge said.