Woman refuses to testify after alleging assault by husband 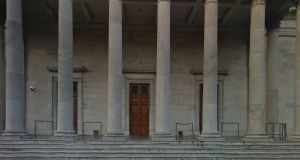 A 36-year-old woman who incurred a brain injury after her husband allegedly assaulted her in the family home has refused to give evidence in his trial in Cork. Photograph: Google Street View

A 36-year-old woman who incurred a brain injury after her husband allegedly assaulted her in the family home has refused to give evidence in his trial.

Anthony Kelleher (42) has pleaded not guilty to a charge that he intentionally or recklessly caused his wife Siobhan Kelleher serious harm at their home in Raleigh North, Macroom, Co Cork on June 12th, 2014.

Cork Circuit Criminal Court heard from investigating gardaí, who said that Ms Kelleher made a complaint against her husband, in which she alleged that he came home “ranting and raving” on the date in question, dragging her out of bed and throwing her downstairs.

Det Garda Tom O’Sullivan told Judge Sean O’Donnabhain that he took a statement from Ms Kelleher in hospital on June 25th, 2014, in which she said her spouse had been “cursing and blinding” at her about a call made to the home from a social worker.

She said he followed her to the bedroom when she went to bed.

The statement allegedly said: “I went to bed and covered my head. He pulled the blankets off me. I said sorry. I put my hand up to my face to save my head. I didn’t want bruises.

“He pulled me out of bed by the ponytail . There was clumps of hair. He threw me down the stairs and kicked me in the ass.”

She reportedly told gardaí that Mr Kelleher subsquently visited her in hospital and said that if she had died he would have thrown himself in the river.

She was treated at Cork University Hospital (CUH) and the National Rehabilitation Centre in Dún Laoghaire.

Defence counsel Tom Creed said a blood sample taken from Ms Kelleher revealed she was five times over the legal limit for driving on the day of the alleged incident.

He said it was his client’s contention that his wife had suffered a fall.

Sgt Marie Keating said she met Ms Kelleher by appointment in April 2015 and she expressed her wish to withdraw her statement against her spouse.

Siobhan Kelleher told Sgt Keating that she had very little recollection of the date in question and that she must have slipped or tripped.

She told the garda that her husband was a “good father” and a “good husband” from a “respectable family”.

Dr Jason van der Veldt, who assisted paramedics in the ambulance on the day of the incident, said he was surprised to note “multiple bruises all over [Ms Kelleher’s] body of various ages”.

Dr Josephine Kelleher, who treated Mrs Kelleher at CUH, said she had a collapsed lung.

She said the type of trauma she had was unusual for somebody who had reportedly fallen down the stairs.

Dr Louise Kelly of CUH stated that Mrs Kelleher was put in a medically induced coma at the hospital.

She noted bruising of the abdomen and multiple bruising on the lower limbs.

She recalled that some of Ms Kelleher’s bruises were older and had gone green and yellow.

Ms Kelleher also had bruising on the scalp on both sides. She had right rib fractures and liver lacerations.

Dr Kelly said the liver lacerations didn’t marry to a fall down the stairs, as such a condition generally involves force from the front to the back.

“The sheer force couldn’t have happened with a fall down the stairs.”

Siobhan Kelleher repeatedly refused to give evidence in the case declining to answer questions from both the prosecution and defence barristers.