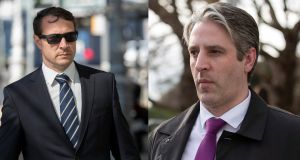 Garret Hevey and David Peile were jailed over actions they took during their involvement in Arden Forestry Management. Photographs: Collins Courts

Two men have been jailed for a fraud in which they induced dozens to invest more than €5 million in a forestry investment scam.

Garret Hevey (43) and David Peile (42) were involved in Arden Forestry Management (Arden FM) between January 2014 and mid-2016 during which 143 foreign investors were induced to deposit approximately €5.5 million into the company’s accounts.

Det Insp Catharina Gunne told Dublin Circuit Criminal Court these investments would have required about 858 acres of land to be serviced but the company only owned 30.2 acres of land when the fraud came to light.

The court heard that in company documentation sent to investors, Hevey used the pseudonym James Baker and Peile went by the name David Marshall. Hevey was in charge while Peile was second in command and there were a number of others employed in trying to attract investors.

Gardaí began investigating the company in June 2016 when one investor, Kari Wahlstrom, discovered that Arden were not the registered owner of the land he had invested in.

Mr Wahlstrom, a Finnish national, had invested €52,000 in February 2016 and in May he contacted the company and asked to visit his investment. He also asked to be taken to the land registry.

On May 17th, 2016, Peile emailed Hevey saying “s**t, he wants to visit the land registry, how do we get over that?” Det Insp Gunne told the court Mr Wahlstrom visited Ireland and met Hevey and Peile.

He was taken to a forest in Frenchpark, Co Roscommon, and was happy with it but when he asked to go to the land registry he was told there was no time.

On returning home he carried out his own inquiries and was “dismayed” to find the land registered to someone else, Det Insp Gunne said.

Hevey, who set up the company in November 2013, pleaded guilty to dishonestly inducing investment in Arden FM .

The judge noted many of the victims made the investments for their children and could not afford the losses.

She described Hevey as the “engineer” of the scheme, noting aggravating factors such as the significant harm to those affected and “inappropriate interference” in the dealings of one of the injured parties with the gardaí.