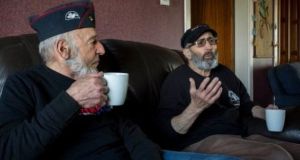 Anti-war protesters Ken Mayers (right), retired US marine, and Tarak Kauff, retired from the US army, after being released from jail in Limerick earlier this year. Photograph: Alan Place

A judge has transferred the trial of two elderly US military veterans charged with criminal damage at Shannon airport out of Co Clare after finding that it would be unjust to hold the trial in the county.

At Ennis Circuit Court today, Judge Gerald Keys said it would be difficult to impanel a jury in Co Clare that would have a neutral view on the issue.

Transferring the case to Dublin Circuit Court, Judge Keys stated that there is a risk with the political climate that exists around the issue of Shannon airport that a Co Clare jury could not be impartial.

Judge Keys said: “To me, this is a very, very live issue in this county. Everyone has a view on the issue that could complicate things.”

The alleged incursion shut down the airport for 45 minutes and resulted in delayed aircraft circling above the airport spending €4,000 on fuel.

It is alleged that the two men were intercepted at ‘Taxiway 12’ on their way to inspect a US military aircraft after 10am on March 17th last.

The two men are involved in an organisation called ‘Veterans for Peace’ and had booked tickets to return to the US on March 20th.

However, the two have remained here since due to their bail conditions and were in court today.

Judge Keys said that the application is a mirror image of another application concerning a person charged in connection to an alleged offence at Shannon airport where he did grant an application to transfer the case out of Clare.

He stated: “If I was to refuse such an application now it would be reversing a decision I made in a previous case.”

In response to the application, counsel for the State, Lorcan Connolly BL stated that the application falls well short of what could be meeting the test of being manifestly unjust.

Mr Connolly stated that there were additional costs and inconvenience in having 19 prosecution witnesses including senior Shannon airport staff travel and local gardaí in Dublin for a protracted period.

Mr Connolly stated that the application to transfer suggests that there is a great notoriety to the case because the two accused are American nationals — the reality is that it is a straight-forward case of alleged criminal damage at the airport.

He stated: “The suggestion that a Clare jury would somehow be otherwise than impartial is not borne out by history where Clare juries approach matters in an intelligent, impartial and fair manner.”

Mr Connolly stated: “Simply transferring cases to Dublin because of a perceived bias is not a precedent that would be welcomed.”

Mr Connolly also stated that the suggestion that whole system is dependent in Co Clare on Shannon isn’t borne out.