Trial date yet to be set over Jobstown water protest 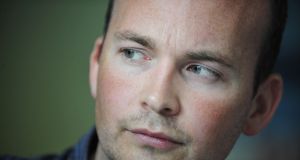 A trial date has yet to be set for Anti-Austerity Alliance TD Paul Murphy on charges of falsely imprisoning Tánaiste Joan Burton during a water charges protest in Jobstown almost 18 months ago. Photograph: Aidan Crawley.

A trial date has yet to be set for Anti-Austerity Alliance TD Paul Murphy on charges of falsely imprisoning Tánaiste Joan Burton during a water charges protest in Jobstown almost 18 months ago.

Mr Murphy (32), of the Copse, Woodpark, Ballinteer, appeared at Dublin Circuit Criminal Court along with 18 others, some facing charges of false imprisonment and violent disorder.

His defence team requested the case be adjourned for mention to allow recent correspondence from the State to be considered. They said they had replied to the Director of Public Prosecutions on Friday and were awaiting a response.

The case of most accused people was adjourned to May 3rd, next, while a warrant was issued for Dylan Collins (20), of Bawnlea Green, Tallaght, when he failed to come to court to answer his bail.

Another accused, Thomas Kelly (33) of Cushlawn Dale, Tallaght, was remanded in his absence after he did not come to court because he has started a new job.

His counsel asked Judge Melanie Greally for leniency as she said her client had attended court on all occasions and the court heard the gardaí­ were not seeking a warrant on the condition that Mr Kelly’s defence team ensure he is notified of the adjourned date.

Judge Greally said Mr Kelly had “seriously underestimated” his need to attend court but said given the “generous attitude of the prosecution” she would remand him in his absence to the same date as his co-accused.

Antoinette Kane (23) of Cloonmore Park, Jobstown, Tallaght, who is due a baby in two weeks was not present in court and Colman Fitzgerald SC, defending, said he had been unable to take instruction from her.

Counsel said his client had been excused at the previous court hearing if she was considered unfit to attend court. She was remanded on continuing bail until May 3rd.

Ms Burton and her entourage had left a graduation event at An Cosan Education Centre at Jobstown, Tallaght when a demonstration was held which delayed her for about two hours on November 15th, 2014.

She and her team had been attempting to travel by car to St Thomas’ Church for the rest of the ceremony when it is alleged violence broke out.

Judge Greally adjourned the case to May 3rd, next for mention after she was advised by Tony McGillicuddy BL, prosecuting that the State only sent through written instruction last Wednesday in relation to its reason for requesting separate trials.

Padraig Dwyer SC, defending Keith Preston (36) of Sundale Lawns, Tallaght, told the judge at a hearing last month that there is an argument for a joint trial rather than splitting the case into separate hearings. He had asked for the State to set out its terms in writing and Mr McGillicuddy had indicated he would do so by March 18th last.

Mr McGillicuddy told Judge Greally the State had to give further consideration to the case and a letter outlining its position, together with the indictment setting out the charges against each accused, was sent out later than had been anticipated.

He said he understood the various defence teams were seeking further time and he said he had no objection to that.