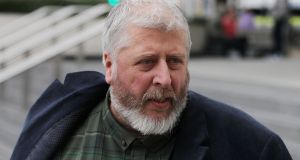 Tom Humphries pleaded guilty in March to six counts of abuse of a girl under the age of 17. Photograph: Collins

Former Irish Times sports journalist Tom Humphries faces up to 10 years in prison when he is sentenced shortly for grooming and engaging in sexual acts with a child.

In Dublin Circuit Criminal Court on Monday, Judge Karen O’Connor said she hoped to conduct the sentencing hearing on July 26th, just before the court breaks for the summer recess.

However, she said the matter might not be heard on that date because other cases had priority on the list. The sentencing hearing will take half a day.

Humphries (54), from Sutton, north Dublin, pleaded guilty to the offences in March but could not be named publicly on that date because he was facing trial for further sexual offences.

Prosecuting counsel Shane Costelloe SC told Judge O’Connor the State was entering a nolle prosequi on the three further charges relating to a separate girl, meaning the charges were not being proceeded with.

Humphries, who was present in court for yesterday’s short hearing, was released on continuing bail pending sentencing.

He pleaded guilty on the morning of his trial last March to six counts of abuse of a girl under the age of 17.

The court will hear that Humphries groomed the girl over a lengthy period of time by exchanging over 10,000 text messages with her. Many of these messages were sent in the early hours of the morning and some contained video files.

At some stage during the grooming process Humphries began engaging in sexual acts with the girl who was in her young teens at the time.

The charges comprise two counts of defilement of a child in Dublin between December 5th, 2010, and February 19th, 2011, and four counts of inviting a child to participate in a sexually explicit, obscene or indecent act between January 2010 and March 2011.

Defilement is defined in Irish law as engaging in a sexual act with a child under the age of 17. It normally carries a maximum sentence of five years but this rises to 10 years if the offender is a “person in authority”.

Sexual exploitation of a child is defined in law as, among other things, inviting, inducing or coercing the child to participate in or observe “any activity of a sexual or indecent nature”.

Humphries’s defence counsel Hugh Hartnett SC requested his client be excused from further case management dates for health reasons. The judge refused the application following an objection from the prosecution.

It is understood Humphries’s defence team will make several submissions on the condition of his health before sentence is imposed.