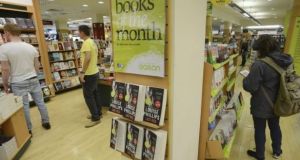 A teenager who was struck on the head when an electronic frame fell off a wall in an Eason store has been awarded €19,000 damages in the Circuit Civil Court.

Circuit Court President Mr Justice Raymond Groarke last year refused a €13,500 settlement offer to student Shauna Kenny (17), who, he had heard, was still suffering from headaches and stiffness in her neck two-and-a-half years after the incident.

Barrister David Boughton, counsel for Ms Kenny, told the court that in July 2012 she had been browsing in an electronic books area at Eason, Lower O’Connell Street, Dublin when the frame had suddenly fallen on her.

Ms Kenny who was 14 at the time, had been struck on her head and right wrist. She had been taken to Crumlin Children’s Hospital, Dublin, where X-rays revealed no fracture.

The court heard that Ms Kenny, of Barnville Park, Ballyfermot, Dublin, had suffered a concussion injury and soft-tissue damage to her neck, lower back and right wrist. A splint had been applied to her wrist.

She had suffered from severe headaches for half a year following the incident. Through her mother Kathy Maher, she sued the bookstore and David James Retail Solutions Ltd, Edenderry, Co Offaly, for negligence.

Judge Groarke heard that following talks between the parties, an increased offer of €19,000 had been made and he approved it.