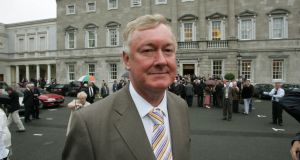 Former minister for justice and ceann comhairle John O’Donoghue has succeeded in joining the publishing arm of the Tralee newspaper Kerry’s Eye in defamation proceedings.

At the Circuit Civil Court in Killarney on Tuesday, Judge Helen Boyle said she was allowing “forthwith” Kenno Ltd, also of 22 Ashe Street, Tralee, to be joined in the defamation proceedings against Kerry’s Eye Ltd, and was extending time to allow this.

The case involved allegations in relation “to conduct in public office”, and this was the differentiating factor from case law opened in court last week – and the defendant too had written a robust defence letter early “pleading public interest”, the judge said.

Last week the court heard how defamation proceedings had been initiated by former minister for justice and ceann comhairle, against the Tralee-based newspaper over articles published in an edition of October 2018 alleging he had been forced from political office because of lavish expenses,