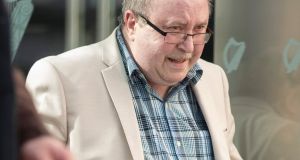 A man who caused “devastating damage” to his home and other houses by causing a gas explosion during an alleged suicide attempt has gone on trial.

Terence Maguire (63) allegedly cut through the inlet pipe in his domestic gas meter and put towels under the doors to keep the gas in the room.

He put a warning sign up, took some sleeping tablets and drifted off to sleep, Eoin Lawlor BL, prosecuting, told the jury. When Mr Maguire woke up he opened the back door and lit up a cigarette, causing an explosion.

A passerby pulled him from the rubble and he was brought to hospital.

Brendan Grehan SC, defending, told the jury Mr Maguire accepted his actions caused the gas explosion that resulted in demolition of his own home and damage to neighbours’ homes and cars.

He said the sole issue is his client’s state of mind of his intention at the time. He described the explosion as causing “utter devastation”.

Mr Maguire, now of Blessington St., Dublin has pleaded not guilty at Dublin Circuit Criminal Court to intentionally or recklessly engaging in conduct which created a substantial risk of death or serious harm to another at Sullivan Street, Dublin on June 1st, 2014. He also denies 13 charges of criminal damage of houses and cars on the street on that date.

Mr Lawlor told the jurors it was open to them to infer that a person consciously disregarded a substantial and unjustifiable risk. He said there was no obligation to assume a person had intended the consequences of their action.

On day one of his trial a witness from Dublin Fire Brigade said the building in which Mr Maguire had been had the walls blown out and the ceiling and roof had collapsed. A pressure release from the explosion had blown out windows in neighbouring homes.

Patrick Mullen testified that he was driving his car nearby when he heard a big explosion and saw a mushroom cloud. He came to the scene and ran into the rubble and began shouting to see if anyone was in there.

He heard the gas still hissing out and then heard someone calling back. “He told me he was after doing it to himself,” he said.

He said he was not happy about this because “we were after going into an unsafe area” but he continued to clear rubble and helped get Mr Maguire out. Mr Grehan told the witness: “you were very brave to go in there and help out, thank you”.

Mr Christopher Singleton, a now retired registered gas installer for Bord Gáis, told Mr Lawlor he inspected the scene after the explosion. He found two holes in a flexi-steel inlet pipe and found a tenon saw.

He said there only needed to be five to 15 per cent gas in the air for an explosion to occur with a source of ignition. He told Mr Grehan the natural gas coming into the house was highly flammable but not poisonous.

He said inhalation would not cause death but would “make you quite sick”. The trial continues before Judge Elma Sheahan and a jury.