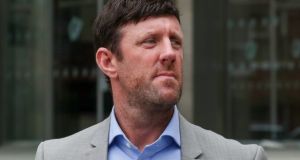 A man who racially abused and attacked a taxi driver has received a fully suspended sentence.

Clive Mason (43) claimed to be a garda while attacking the man and demanded that he get out of the car. Mason presented himself to gardaí after footage of the assault began to circulate on social media and news websites.

Det Garda Fox said on the date in question, Mr Johnson picked up the accused man on Baggot Street. He asked to be driven to his home in Malahide.

Mason was shouting from the start of the journey, leading Mr Johnson to pull over and ask him to leave the car. Mason apologised, shook Mr Johnson’s hand and the journey continued.

When the car had reached the Malahide Road, the accused asked Mr Johnson what his favourite position was. Mr Johnson said he did not understand the question.

Mason took off his seat beat and jumped on the wheel, causing the car to turn to the left side of the road. He began to punch Mr Johnson, catching him a couple of times in the face.

Footage taken from the taxi’s dash cam was played before the court. During the attack, Mason can be heard saying “drive me home you f**king n****r c**t” and claiming to be a garda while demanding Mr Johnson get out of the car.

Mason got out of the car and Mr Johnson locked all of the doors. Mason walked around to the driver’s door and attempted to open it, kicking the door when he failed to do so.

Det Garda Fox said footage of the assault began to circulate on social media and news websites. Mason presented himself to a garda station the following weekend.

In interview with gardaí, Mason said he was very drunk at the time and claimed this was not who he really was. Mason said the video was disgraceful and said he had no explanation for punching Mr Johnson in the head.

Mason has three previous convictions, including convictions for speeding, disorderly conduct and intoxication in a public place. He has two children.

Det Garda Fox agreed with Rebecca Smith BL, defending, that her client had €5,000 in court with him for the victim. He said Mr Johnson does not wish to accept that money and has issued civil proceedings in the High Court against Mason.

Ms Smith said her client had been subjected to abuse online as a result of the video. She said this was “a very modern case”.

Judge Martin Nolan replied that while there being in a video is modern, “attacking and being racist is as old as the hills”.

Judge Nolan said Mr Johnson was racially abused and subjected to “a racial attack”. He said it was a “dreadful assault” and told Mason that he had disgraced himself.

He said the case was mitigated by Mason surrendering himself to gardaí, making full admissions, his apology and his taking steps to reform and rehabilitate himself. He said it seemed Mason should not drink and when he is intoxicated as he becomes bad-tempered.

Judge Nolan sentenced Mason to 20 months imprisonment, which he suspended on condition Mason keep the peace and be of good behaviour for 20 months and follow all directions of the Probation Service for six months.

He ordered that the €5,000 be handed over to the investigating garda and if Mr Johnson does not wish to accept it, the garda should forward the money to a charity of his choice.