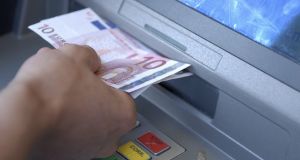 A jury at Sligo Circuit Court took less than an hour to convict Bernard Quigley of Branchfield, Drumfin, Co Sligo, who had denied three charges in connection with the theft of an ATM from a bank. File photograph: Getty Images

A 43-year-old man who used a stolen digger to smash through a bank wall has been found guilty of stealing an ATM which contained more than €124,000.

A jury at Sligo Circuit Court took less than an hour to convict Bernard Quigley of Branchfield, Drumfin, Co Sligo, who had denied three charges in connection with the incident.

During the three-week trial, the jury heard a Komatsu digger was used to rip the ATM safe out of the wall of the Bank of Ireland branch at Teeling Street, Tubbercurry, Co Sligo in the early hours of January 29th, 2014.

The court heard it cost €40,000 to repair the bank wall and restore the ATM.

After the jury unanimously convicted Quigley of three charges, Judge Francis Comerford praised members of the public who had alerted gardaí. He will sentence Quigley on Thursday.

The jury was told the stolen ATM fell off the back of a trailer almost immediately after the culprits drove away at speed from the bank.

During the trial there was evidence gardaí were alerted by witnesses to the incident within minutes.

They discovered a white van, trailer and the ATM abandoned on a country road at Carrowneden, Coolaney, not far from the scene of the theft. The keys were in the van and the lights were still on.

In her summing up, Eileen O’Leary SC, prosecuting, said gardaí were unlucky not to have caught the culprits red-handed.

Counsel told the jury the defendant’s DNA was found at four locations and on three vehicles connected with the theft, including on the handles of the stolen digger.

The jury was told suspicious items including metal-cutting equipment which gardaí believed would have been used to open the ATM were found in an isolated forest on the day after the robbery.

Alan Toal, counsel for the accused, told the jury there were gaping holes in the case.

The defendant’s partner, Bride Wynne, said he had left her home in Coolaney at about 7pm or 8pm on the night of the robbery.

In her statement to gardaí she said Quigley was “drowned wet” when he returned the following day.

Run out of petrol

He told her he had run out of petrol and had to walk home. “He looked like a half-shagged monkey,” she told gardaí.

Bread delivery man Declan Egan told the trial he saw a digger knocking down a bank wall as he drove through Tubbercurry just after 5am on the morning of the robbery.

The witness, who dialled 999, said the culprits drove off at speed but had gone only about 15 metres when the ATM fell into the middle of the road. They had to return to retrieve it.

Another witness, Paul Murphy, told the court that his mother, who lives across the road from the bank, had rung him at about 5am that morning and said: “They are knocking down the bank.”

He dialled 999, drove to the scene and ended up following the thieves out an isolated road in his car. He spoke to gardaí on the phone as he did so.

Judge Comerford said Mr Murphy had performed a considerable public service, but was glad he had the good sense to reverse away when he felt under threat. The judge added it was laudable that gardaí had such support from the community.

The accused had denied dishonestly appropriating an ATM containing cash on January 29th, 2014.

He also denied being in possession of a stolen digger, and causing criminal damage to a wall and ATM housing at Teeling Street, Tubbercurry on the same date.