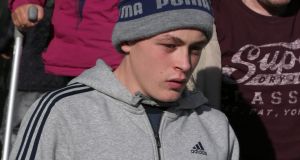 A man who carried out a knifepoint robbery of a bike from a cyclist will be sentenced next month.

Ian McCluskey (20) pleaded guilty at Dublin Circuit Criminal Court to robbery at the Seventh Lock on the Royal Canal, Dublin on July 31st, 2016.

Dean Kelly, prosecuting, told the court Fiach McHale was cycling along the canal when he came to the canal lock and dismounted.

McCluskey came up to him and asked him for the time. When the victim took his mobile phone out to check the time, McCluskey pulled out a box-cutter knife.

He waved the knife in the victim’s face and told him to “get off the bike and run”, the court heard.

McCluskey then jumped on the bike and cycled off, taking the victim’s mobile phone and a second phone that was in pannier on the bike.

He admitted the theft and told gardaí the victim was “obviously scared”. He said he never intended to use the blade and asked gardaí to tell the victim he was sorry.

In a victim impact statement, Mr McHale said he was threatened at knifepoint and could not defend himself. He said he was left miles from home after the robbery.

1 US passengers fly into Dublin: ‘I’m here for six days. I guess I’ll have to stay inside’
2 Covid-19: Restrictions on travelling abroad may last several years, expert warns
3 Back with our old friends at eir – and nothing seems to have changed
4 Stunning image of comet Neowise captured over Dublin Bay
5 Coronavirus: Cases surge in southern US states as Italy and Germany hold steady
Real news has value SUBSCRIBE