Former property developer had been reported missing in May 2012 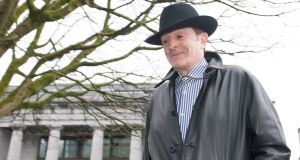 He had pleaded guilty to making false reports about being kidnapped at gunpoint three years ago, in a bid to dodge his creditors.

Mr McGeever (71), with a former address at “Nirvana” Ballywinna, Craughwell, Co Galway, and more recently in Clontarf, Dublin 3, entered the guilty plea moments before this trial was due to begin at Galway Circuit Criminal Court earlier today.

In a barely audible voice in front of a jury panel, McGeever replied “Guilty” when a single charge was put to him of giving false information to the gardaí, on dates between January 29th and February 28th, 2013, at diverse places within the State, he knowingly made false reports and statements to gardaí, about allegations of false imprisonment and threats to harm, thereby causing Garda time to be wasted.

The facts in a second charge of giving false information, where he told gardaí he had been falsely imprisoned, assaulted and threatened with harm during the same six-week period, were also admitted.

The sentence hearing was told McGeever fabricated the entire story in a bid to shake off both Irish and international creditors who lost vast sums of money in failed investments he had undertaken on their behalf in Dubai, following the economic crash in 2008.

Detective John Keating gave evidence that McGeever was found lying on the side of the road by a local couple near Ballinamore, Co Leitrim, at 9.40p.m. on January 29th, 2013.

“He said he had been dumped on the side of the road from the back of a van.

“The couple told him they would bring him to Ballinamore Garda Station, but he declined and asked to be taken to Carrick-on-Shannon and not to a Garda Station.

“They insisted on bringing him to Ballinamore Garda Station,” Det Keating said.

McGeever told gardaí in Ballinamore he had been abducted at gunpoint from his property in Craughwell on May 27th, 2012.

Gardaí were concerned about his medical condition as he was in bad physical shape and he was transferred briefly to Mullingar hospital.

He subsequently gave eight statements to gardaí alleging he had been kidnapped, assaulted and ill-treated.

Det Keating said McGeever was consistent in all his statements that he had been abducted at gunpoint from his home in Craughwell and held 20 feet underground in a steel container for eight months, with no lighting, heating or sanitary facilities.

Det Keating said a six-week Garda investigation got underway, involving 19 gardaí, most of whom worked exclusively on the investigation because of the allegations McGeever made of being kidnapped at gunpoint.

A total of 3,038 man-hours, costing the taxpayer €86,851, in Garda travel expenses and subsistence allowances, was spent on the investigation, he said.

“A large number of enquiries were carried out around the country and a number of anomalies appeared.

“I was of the opinion he had fabricated his version of his abduction,” Det Keating said.

McGeever was arrested in Craughwell on March 14th, 2013.

He was brought to Gort Garda Station and interviewed on four occasions.

“He maintained his stance and continued with the pretence during the first three interviews, but during the fourth interview, he made full admissions that he had fabricated his story to the gardaí and he gave his reasons for doing so,” Det Keating said.

Prosecuting barrister, Conor Fahy said that when McGeever was found on the side of the road, he had first given a false name to the couple and to the gardaí in Ballinamore, stating he was John McGeever from Clontarf.

Mr Fahy said the accused came originally from Swinford, Co Mayo, and still had family there.

Det Keating confirmed McGeever currently lives in Clontarf, at the address of his late partner.

“He’s not working. I do not believe he had any business interests at this stage,” he added.

When McGeever finally “came clean” to gardaei in 2013, he had said: “I’m very relieved to get this off my chest and I wish to thank the gardaí.

Mr John Jordan SC, defending, told the sentence hearing his client would be 72 years of age next September.

“He did something incredibly stupid because of certain stress factors in his life at the time.

“His long-term partner died of terminal cancer in November 2013 and he was under significant pressure too because of the financial crisis in this country and internationally at the time, which caused him to lose virtually all that he had,” Mr Jordan said.

He explained that McGeever got involved in property development in Dubai.

“However, after the world-wide recession in 2008, considerable money was owed to investors, particularly here in Ireland, and he was under pressure from those creditors to make good on those investments,” Mr Jordan said.

Det Keating agreed with counsel that McGeever had hoped that by creating the account of his kidnapping a number of his creditors would back off and would have nothing more to do with him.

He confirmed McGeever had spent 16 days on remand in Castlerea prison in July/August 2013, before taking up bail.

In his submissions to the court, Mr Jordan said it wasn’t often he defended a man who was going on 72 years of age, who had no previous convictions.

He said McGeever had been involved in the construction industry and had lived in the US and Australia, coming back to Ireland on a few occasions.

“He went to Dubai and invested his money there and lost almost everything he had there.

“He was under huge financial pressures and further personal pressure due to his partner’s terminal illness.

“He did what he did because at that stage of his life, coping with those stresses, he thought it a good idea,” Mr Jordan said.

“This appears to be a significant aberration on the part of an elderly man who was at a very low point in his life,” Mr Jordan said.

He said that by pleading guilty, McGeever had saved the State the further expense of running a trial in front of a jury.

“I’m asking the court to be lenient,” Mr Jordan concluded.

Judge Rory McCabe said the gardaí have enough to do rather than chase false trails.

He said the accused had contrived to waste Garda time, and the cost of having 19 gardaí carry out the investigation had to be “picked up and paid for” by the taxpayer.

He noted McGeever had only pleaded guilty at the last moment, in a trial which had been flagged to take two weeks.

In mitigation, he said the plea of guilty was of considerable value in not wasting the court’s time and brought some justice for the taxpayers, who he said, were ultimately “footing the bill”.

The charge, he said, would ordinarily merit a custodial sentence to act as a practical punishment and as a warning to others that such offences would not be taken lightly.

Taking McGeever’s age and previous good record into account, the judge said the appropriate sentence was two years in prison.

He then posed the rhetorical question, would it be in the interests of justice to impose an immediate custodial sentence, before concluding the taxpayer had spent enough money on the accused already.

“If I send him to prison, the taxpayer will have to pay for his upkeep; to house, clothe and feed him, so I will suspend the sentence for five years,” Judge McCabe said.

He added that his sympathies did not lie with the accused as he had no good reason to do what he did.

“My sympathy goes entirely to the gardaí and the taxpayers who have had to foot the bill,” he said.