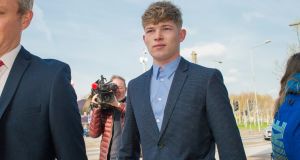 Joshua Allen (19) of Ballinamona, Shanagarry, Co Cork had pleaded guilty earlier this year to three drug offences, including one of possessing 1.134 kilos of cannabis for sale or supply at Ballymaloe Cookery School on August 30th, 2018. File photograph: Provision

The teenage son of celebrity chef, Rachel Allen has been remanded in custody after a judge said he was less than impressed with a probation report on the young man who has pleaded guilty to possessing €22,000 worth of drugs.

Joshua Allen (19) of Ballinamona, Shanagarry, Co Cork had pleaded guilty earlier this year to three drug offences, including one of possessing 1.134 kilos of cannabis for sale or supply at Ballymaloe Cookery School on August 30th, 2018.

Allen signed for and accepted the package outside the shop at the cookery school and gardaí watched him open the package before moving in and arrested him for questioning about the drugs.

Det Sgt O’Halloran said that Allen told gardaí that it was the third or fourth such delivery that he had organised, obtaining the drug from a woman in California whom he had met some time previously in east Cork.

He had been reluctant to wire money to the woman so he had gone to London and paid for the drugs there, handing over €2,000 in cash, said Det O’Halloran, adding that Allen had co-operated fully with gardaí in their investigation.

Defence counsel, Siobhan Lankford SC said that Allen, whom the court heard had no previous convictions, had left school at the age of 15 and since this incident had done volunteer work with a homeless charity.

She conceded that a probation report on Allen was not “particularly helpful” but she said that he had gone to Arbour House for treatment for a cannabis addiction though he had some lapses while going for the treatment.

However he was awaiting a residential place at Tabor Lodge and had already attended a pre-entry course to go to Tabor Lodge and he was now endeavouring to come to terms with his addiction, she said.

Judge Seán Ó Donnabháin said that to say Allen’s probation report was “not particularly helpful” was an understatement as it revealed a young man who had little appreciation of the seriousness of the situation facing him.

“I am less than impressed by his progress to date in the probation report – this lad has not matured in the way I would expect and require of a person coming before the court on such serious charges,” he said.

“He is knitting his own jumper which I won’t allow him to do,” said Judge Ó Donnabháin, explaining Allen had gone from the probation service and self-referred himself to Arbour House and Tabor Lodge which did not impress him.

He said he would remand Allen in custody until November 29th to see if he had obtained a residential place at Tabor Lodge but he warned that if such a place was not available, Allen could find himself facing a longer period in custody.