Teenager had gone to London with €2,000 to organise drug deal from the United States 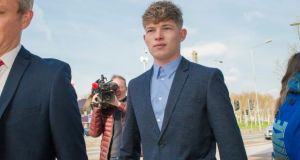 The teenage son of celebrity chef Rachel Allen has been jailed for 15 months after a judge said his level of culpability in possessing €22,000-worth of drugs for sale or supply was significant.

Joshua Allen (19) of Ballinamona, Shanagarry, Co Cork had pleaded guilty last year to three drug offences, including one of possessing 1.134 kilos of cannabis for sale or supply at Ballymaloe Cookery School on 30 August 2018.

Allen signed for and accepted the package outside the shop at the cookery school and gardaí watched him open the package before moving in and arrested him for questioning about the drugs.

Det Sgt O’Halloran said Allen told gardaí it was the third or fourth such delivery that he had organised, obtaining the drugs from a woman in California he had met some time previously in East Cork.

He had been reluctant to wire money to the woman so he had gone to London and paid for the drugs there, handing over €2,000 in cash, said Det O’Halloran, adding that Allen had co-operated fully with gardaí in their investigation.

Judge Sean O Donnabhain had remanded Allen in custody for a month saying he was not impressed with Allen’s attitude towards drugs in a probation report but he later released him to attend a residential drugs treatment course.

On Friday, senior counsel Siobhán Lankford SC submitted a probation report and a report from both the Cuan Mhuire Drug Treatment Centre where Allen has spent the past three months getting treatment for cannabis addiction.

Ms Lankford pleaded for leniency, pointing out that Allen’s drug addiction was such that he had taken cannabis prior to his first court appearance and had actually tested positive when he attended at Cuan Mhuire for the first time.

But she said that since then he had a different attitude towards drugs, and she asked the court to treat him no differently to anyone else who came before the court with no previous convictions and who had entered an early guilty plea.

Judge O Donnabhain prefaced his remarks at sentencing by saying: “Any suggestion that I would treat this accused differently to anyone else is very offensive – he has been treated the same as anyone else.”

He said he disagreed with a defence suggestion that there was a certain amateurishness to Allen’s offending, pointing out that he had gone to London with €2,000 to organise the drug deal from the United States.

He said the Probation Service and Cuan Mhuire reports were both positive but they only brought Allen to the place he should have been last November when he [the judge]made no promises that he would avoid a custodial sentence.

Judge O Donnabhain said he accepted Allen had no previous convictions, had entered an early guilty plea and had a supportive family but he noted the probation report found he was at a moderate risk of re-offending.

He noted that Allen had a sad background in that he had left school at the age of 15 before completing his Junior Certificate without any qualifications, but the level of culpability was significant notwithstanding his age.

He sentenced Allen to 30 months in jail but suspended the final 15 months, leaving Allen with 15 months to serve and he backdated the sentence to November 8th when Allen first went into custody.