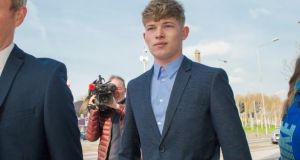 Joshua Allen is to spend the next three months in a residential facility for addiction treatment prior to his sentencing for possessing over €22,000 worth of drugs. Photograph: Provision

The eldest son of celebrity chef Rachel Allen is to spend the next three months in a residential facility for addiction treatment prior to his sentencing for possessing over €22,000 worth of drugs.

Joshua Allen (19 ) of Ballinmona, Shanagarry, Co Cork had been remanded in custody at Cork Circuit Criminal Court earlier this month. The presiding judge in the case Sean Ó Donnabháin said his response to facing serious drug charges was “unimpressive”.

This Friday at the court defence counsel Siobhán Lankford SC said her client had been anxious to secure a bed in a continuous residential treatment programme for his addiction issues. The bed has now been secured.

Mr Allen will remain in the treatment facility right through Christmas and up to and possibly beyond his sentencing hearing, depending on the outcome of the case.

Counsel for the State, Donal McCarthy SC, said they had no objection to Mr Allen entering a residential treatment programme provided that he goes under the direction of the probation service and immediately takes up his place in the facility. The treatment centre will inform the probation service if Mr Allen steps out of line whilst in residential care for his addiction issues.

Miss Lankford said her client had no difficulty in complying with any and all directions of the court.

Judge Ó Donnabháin remanded Mr Allen on bail on his own bond of €100 until his sentencing hearing on the February 28th next. He directed Allen immediately enter the treatment facility.

He said no determinations had been made about the outcome of the case and that there was “no guarantees in this courtroom”.

Mr Allen left the courtroom accompanied by his father Isaac.

He pleaded guilty to possession of cannabis for sale or supply when the market value exceeded €13,000 or more.

Mr Allen pleaded guilty to possession of cocaine on the same occasion.

He also pleaded guilty to possession of cannabis on September 5th 2018 at Ballinamona, Shanagarry, Co Cork.

Cork Circuit Criminal Court heard Allen was arrested in September 2018 after the controlled delivery of a parcel containing the cannabis to an address in East Cork.

Customs in Portlaoise Mail Centre had become suspicious of the parcel which had a US postmark.

Det Garda Michael O’Halloran told the court the package was intercepted by customs in Portlaoise. It was found to contain cannabis with a street value of €22,694. A controlled delivery was arranged addressed to Joshua Allen at Ballymaloe Cookery School.

The package was signed for and received by Mr Allen. Gardai observed him opening the package and intercepted same. A small quantity of cocaine worth €66 was found to be in the wallet of the defendant.

Mr Allen was arrested and detained at Cobh Garda Station. He admitted that it was his third or fourth time engaging in such a delivery.

He co operated fully with gardaí and told investigating officers that he secured the drugs from a female resident in California whom he met in East Cork.

He had travelled to London and paid her €2,000 in cash for the drugs.

On September 5th a further small quantity of cannabis was found at Ballinamona, Shanagarry, Co Cork. The cannabis, which was found at his home, had a street value of €203.