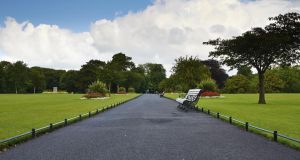 A murder trial has heard that a homeless man found on fire in a Dublin park had almost €150,000 in funds just weeks before his body was found ablaze.

The prosecution was opening its case to the jury in the trial of the 29-year-old man charged with murdering Gerard Donnelly in 2013.

Caroline Biggs SC explained that Mr Donnelly’s left little toe had been freshly amputated and that he had a v-shaped wound to a thumb, when his body was found in the Phoenix Park.

She had already warned the jurors that there would be disturbing aspects of the case but not to allow this to cloud their judgement in any way.

Ciaran Moran, with an address at Camden Hall, Camden Street in Dublin is charged with murdering Mr Donnelly at an unknown time during November 28th or 29th, 2013.

Mr Moran was arraigned before the Central Criminal Court. He pleaded not guilty to murdering Mr Donnelly in the Phoenix Park.

Ms Biggs explained that the State was not in a position to specify an exact cause of death, but that it was some time in the late hours of November 28th and the early hours of November 29th, when a garda and a number of witnesses noticed a fire.

She said that when gardaí investigated, they found Mr Donnelly’s body on fire, with an aerosol can in his crotch area. Death was pronounced at 2.25am.

She said that State Pathologist Professor Marie Cassidy gave the cause of death as blunt force trauma to the head and noted areas of fire damage under the head and neck. She said that the skull was extensively fractured and the brain was injured.

She said there was a v-shaped wound to a thumb and the left little toe had been freshly amputated.

The pathologist had concluded that he had received multiple blows to the head from a heavy object and that a lump hammer found beside the body could have been the weapon used.

Ms Biggs said that a canister with a blow torch attached was also found at the scene.

She said that the deceased had been identified through DNA testing.

The barrister said that the issue the jury had to decide was whether the accused had caused Mr Donnelly’s death and whether he had the necessary intention. She said that, to consider this, they would have to look back further.

She said that both men were homeless, with the deceased living in the park and the accused in a hostel. She said that the jury would hear from gardaí, who had come into contact with both men in the weeks before the death.

She said they would hear evidence to put the deceased in the area around 10.30pm on the evening of November 28th and that he didn’t stay in his hostel that night, but checked into a B&B between 2am and 4am.

She said that he was in possession of items consistent with what was found at the scene, including hammers and a gas canister. She said he was also aware that Mr Donnelly was a man of considerable means and that the accused later had the funds to buy a phone and bicycle.

She said that he attended a Christening on November 30th, became intoxicated, was hospitalised and apprehended.

“He made certain, significant admissions in relation to causing the death,” she concluded.

The jury also saw photographs of items found at the scene, including a burnt hammer and blow torch that had been lying on the body.

Detective Garda Gerard Flanagan of Garda Crime and Security testified that he noticed a fire at 12.15am on November 29th while on his way home from Garda Headquarters in the Phoenix Park.

He said the fire near the Wellington Monument was fairly large, about four or five feet high. He also noticed three people walking in that area, two men and a woman. He believed the woman to be carrying ‘sleeping stuff’.

Dr Haroon Khan said he was called to the scene and arrived at 2.20am. He saw a male lying face up with signs of burns but no signs of life.

He said the body was severely burnt from head to toe and his face was unidentifiable.

He said there were no shoes on his feet, but there were burnt shoes on the grass nearby. There were also burnt clothes at the head.

He said there were two canisters at the scene, one on the left thigh near the genitalia.

He pronounced death at 2.25am, remarking that it was a suspicious death and might have been secondary to severe burns.

The trial continues before Ms Justice Margaret Heneghan and a jury of nine men and three women.

It is expected to last 10 working days.