Guilty plea after man kicked in head during robbery 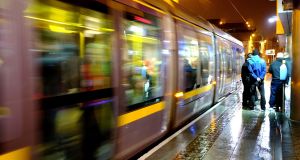 A teenager knocked a Luas customer onto the tracks while his friend kicked him in the head during a robbery, a court has heard.

Mr Benson has no recollection of the incident, but an eyewitness later told gardaí­ the man was waiting for the Luas when “all of a sudden” one of two teenagers standing nearby shouted “get him” before they both started kicking and punching the man.

The victim tried to run away but the pair chased him. Smith tripped Mr Benson and he fell onto the tracks, where his accomplice continued to kick the man in the head while he lay on the ground.

Judge Sarah Berkeley was shown CCTV footage of the attack after Mr Benson requested, through prosecuting counsel, that it be shown in court.

Garda Murray agreed with George Burns BL, defending, that Smith’s cousin had been attacked in a similar way to Mr Benson on New Year’s Day in 2014 in Tallaght. That man had been beaten to death.

Mr Burns told Judge Berkeley that his cousin’s murder had a massive impact on him, and he picked up a significant number of charges in an 18-month period.

“He more than appreciates what the consequences could have been for Mr Benson and that he is lucky to be alive and not have any ongoing serious injuries,” counsel said.

His client had written a letter for the court and a letter of apology to Mr Benson.

A victim impact report stated that Mr Benson was no longer the “happy and outgoing” man he had been. He was afraid while walking in public places and “feels like he is living in a shell”. He added that he felt violated.

He said he had come to Ireland 17 years ago to escape war in his native Liberia, and spent days hiding in a boat to do so.

He had hopes of starting a new life in this country, and before the attack felt he had accomplished this.

“I never thought I could be randomly attacked. It changed my whole outlook on my life and my safety,” Mr Benson stated.

Garda Murray confirmed that Mr Benson only recalled waiting for the Luas to go home after work. His next recollection was opening his eyes to find himself on a bed in hospital being taken in for X-ray.

He felt dizzy and found it difficult to breathe. He then noticed his phone was missing.

Mr Benson spent three days in hospital undergoing various scans and X-rays due to the seriousness of the attack. He was kept in for 48 hours for observation before being released.

Garda Murray said he arrived on the scene to find Mr Benson lying unconscious. He stayed with him until emergency services arrived and later viewed CCTV footage of the attack.

He told Ms Brennan the culprits were not immediately recognisable.

They were wearing distinctive clothing, which allowed for their ultimate nomination as suspects after earlier footage from other cameras was viewed.

Smith was arrested and interviewed but made no admissions.

Judge Berkeley remanded Smith in custody until April 4th next for sentence. She ordered a report from the Probation Service for that date.