Former waitress awarded €25,000 after not being shown how to polish wine glass 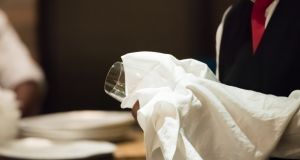 Judge John O’Connor said in the Circuit Civil Court that 24-year-old former waitress Daniela Tricolici ought to have received training in the safe way of polishing wine glasses when she worked in Ravellos Restaurant, Clonsilla, Dublin, five years ago. Photograph: iStock

There’s a right and wrong way of polishing a wine glass and because a restaurant proprietor failed to teach a waitress how to do it properly it has cost his company close to €50,000 in damages and legal costs.

Judge John O’Connor said in the Circuit Civil Court that 24-year-old former waitress Daniela Tricolici ought to have received training in the safe way of polishing wine glasses when she worked in Ravellos Restaurant, Clonsilla, Dublin, five years ago.

“I am satisfied on the balance of probability that the defendant in this case was negligent. There was no training provided and it should have been,” Judge O’Connor said in awarding Ms Tricolici €25,000 damages and her legal costs.

Forensic engineer Conor Murphy, giving evidence on behalf of Tricolici, said she had demonstrated how she had been holding and polishing the glass with a towel when the accident occurred.

He told barrister Conor Kearney, who appeared with Seamus Maguire Solicitors for Ms Tricolici, that in his opinion she had been doing it wrongly and should have been stopped by her employer and shown how to do it in a safe manner. She should have been trained initially how to do it safely.

Mr Murphy said Ms Tricolici, as demonstrated in a photograph provided to the court, had held the base of the wine glass in one hand while polishing the bowl with her other hand in a twist and turn fashion when the stem had snapped.

Had she been shown how to do it safely she would have been cupping the bowl of the glass in one hand while using the polishing cloth with her other hand. Having polished the glass in such a manner it would have been highly unlikely on the day that the stem, even if it had a hairline fracture invisible to the naked eye, would have snapped and injured her.

He told Philip Fennell, who appeared with Ambrose O’Sullivan Solicitors for the restaurant owner, that while he could not pin-point any specific provision in legislation or a particular manual on glass polishing he had seen proper and safe methods of glass polishing demonstrated on video by glass manufacturers.

Mr Fennell told the court it would be imposing a heavy burden on an employer to ask them to train someone when there was no accepted training regime or accepted pattern of training in existence as to how a particular task should be performed.

Ms Tricolici, of Ravenswood Road, Clonsilla, Dublin, who now works for a bank, said the stem of the glass had snapped as she polished it in the bar area of the restaurant on September 18th, 2015 and punctured her left little finger.

She had immediately been taken to Connolly Hospital, Blanchardstown, where the wound was sutured. Medical reports revealed she had been left with a small scar and that damage to a nerve in her finger had not properly healed and she still suffered hypersensitivity in the area of the injury. She told Judge O’Connor her finger was affected when touching items and in cold weather she often had to wear a glove.

Judge O’Connor said he was satisfied the defendant, ABE Restaurant Limited, Weaver’s Row, Clonsilla, had been negligent. It was accepted that training for Ms Tricolici had not been provided and it should have been.