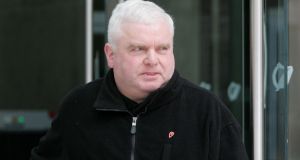 Tony Walsh is currently serving a 17 and a half year sentence for raping another boy three times in the 1980s. Photograph: Cyril Byrne 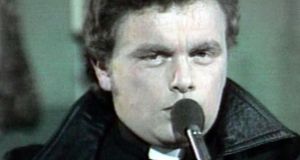 Walsh (64), formerly of North Circular Road, Dublin is currently serving a 17 and a half year sentence for raping another boy three times in the 1980s. On one of these occasions, he raped the victim with a crucifix.

Walsh pleaded guilty at Dublin Circuit Criminal Court to his latest charge of indecently assaulting a teenage boy on a date in 1983. He has 14 previous convictions for sex-related offences dating from the mid 1970s to the mid 1980s.

Judge Cormac Quinn sentenced Walsh to five years imprisonment, but suspended the final 18 months for a period of two years on condition that he keep the peace and be of good behaviour and engage with probation services for two years post release.

Garda John Barrett said the boy had gotten drunk in an unrelated incident, had woken up naked and in pain with Walsh on top on him in a single bed.

Garda Barrett told Dara Hayes BL, prosecuting, that this was Walsh’s bedroom at the time and that he had placed his penis inside the boy’s anus for a “split second”. The injured party told gardaí it had been a “stabbing pain” and that he had roared and pushed Walsh off him.

The then teenager saw Walsh was wearing a white vest with no underwear on. The boy put his clothes on as fast as he could and ran home, where he cried in his room before going to sleep. The court heard he did not tell anyone because he was so ashamed.

Garda Barrett told Mr Hayes the injured party turned to drinking after this incident. A victim impact report was handed into court but not read out. The garda agreed with Paul Carroll SC, defending, that Walsh’s guilty plea had spared the injured party from giving evidence at a trial.

Mr Carroll submitted that his client has a release date from his current sentence in 2021. He said Walsh has served in the region of 13 years in jail for all the convictions against him to date.

Counsel said he had been instructed to apologise to the injured party and submitted that there had been an “inordinate and culpable prosecutorial delay” in the case coming to court.

He said his client had been in custody for large periods of time and that the offending had stopped a long time ago. He said Walsh had been dealing with his issues and accepted his wrongdoing “in the context of keeping his religious faith”.

He said he mitigating factors in the case were Walsh’s plea of guilty, his age, his apology, his having already served in the region of 13 years imprisonment and a governor’s report which described Walsh as a “model prisoner”.

Judge Quinn backdated the sentence to July 17th last when Walsh entered his plea of guilty.