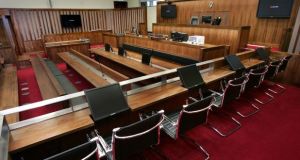 A victim of child sex assault has said he chose to get a vasectomy because he was afraid if he had children he would not be able to protect them from abuse.

The man’s victim impact statement was read out in court during the sentence hearing of his 64-year-old father, who was convicted of sexually assaulting his seven-year-old son in 1989.

During a trial at Dublin Circuit Criminal Court last month the victim said his father had taken him swimming and then brought him home. He said he remembers his father trying to hypnotise him before sexually assaulting him.

The defendant, who cannot be named to protect the victim’s identity, was himself a victim of sexual abuse at Letterfrack industrial school during the early 1970s. The court heard he was sent there at 13 and left years later with no formal educational qualifications.

He had pleaded not guilty to the indecent assault of a minor in at a place in Dublin in 1989.

Detective Garda David Chapman told the court the victim made a complaint to gardaí­ in 2015. When the detective later arrested the accused, the man told them he had masturbated his son.

He later told gardaí­, during an interview, that he was “washing him, cuddling him, sucking him” and said: “I was just playing around with his penis, I was trying to bond with him and to teach him sex things”.

He told gardaí ­that after making these confessions he felt better, saying “I feel cleansed now”.

After being charged, he denied the offence and during the trial he testified that the accusation was false. After Judge Pauline Codd sentenced him on Monday to four-and-a-half years imprisonment, he told her: “I agree. I’m not guilty”.

In a victim impact statement, the man’s son wrote that his childhood was stolen from him and that he still suffers flashbacks and nightmares about the assault.

He said he has issues trusting people. He choose to have a vasectomy because “I’m afraid to bring kids into this dangerous world”, and fears he would “not be able to protect them from predators”.

Judge Codd said the assault was particularly reprehensible because it was against the man’s own son and was a grave breach of trust.

She said she had to take into consideration, as mitigation, the fact that the man was a victim of child abuse himself while in the care of the State.

“Sadly abuse often begets abuse,” she said. She noted he had shown no insight into the effects of his own actions, but also had a history of severe mental illness and “alcohol dependence syndrome”.

She suspended the last six months of the sentence on condition that he engage with the Probation Service after his release.