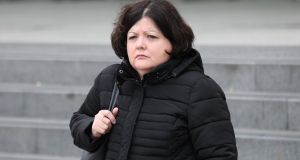 Alice Warnock (54) told gardaí she was sorry and “felt like a fool” after the fraud was uncovered while she was on sick leave in 2012. Photograph: Collins Courts.

A former Bank of Ireland worker who took €144,089 from the bank to put in her own accounts and those of family members will be sentenced in October.

Alice Warnock (54) told gardaí she was sorry and “felt like a fool” after the fraud was uncovered while she was on sick leave in 2012.

The court heard Warnock’s family had been unaware she had lodged money into their accounts.

The mother-of-two, from Rathbeale Court, Swords, Co Dublin, pleaded guilty at Dublin Circuit Criminal Court to nine sample counts of stealing from bank branches on Talbot Street and Malahide Road, Coolock, between November 2004 and March 2012. She has no previous convictions.

Detective Garda Siobhán Moore said Warnock, who had been employed with Bank of Ireland since 1980, took amounts ranging from €600 to €5,000 out of the bank’s internal administration account.

She said the bank began an investigation in May 2012 while Warnock was on sick leave and got details of all her accounts where misappropriated amounts were seen as lodgements.

Warnock told gardaí­ the offending had “all got out of hand” and that her family had not been aware of what she was doing.

Det Garda Moore said Warnock, who had since lost her job, co-operated and took full responsibility. The detective agreed with Lorcan Staines BL, defending, that she had family support and was a full time carer for her sick, elderly parents.

She agreed Warnock had €7,000 in court and would undertake to pay €3,500 per quarter to eventually compensate the bank in full.

She further agreed that the family was “downsizing” their home to also help with the repayment.

Judge Greally ordered that the €7,000 in court be paid over and adjourned sentencing for six months to see how Warnock progressed with her intended repayments and the sale of the house.