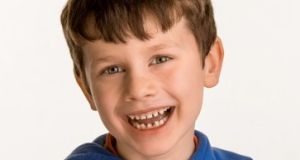 The late Cian Marren. His father Liam Marren said he and his wife visit his grave every night to read him a bedside story.

The father of a six-year-old boy who was killed after being struck by a van breaking a red light at a pedestrian crossing has told the driver his family forgives him.

James O’Brien (37) of Kilbogget Grove, Cabinteely, Dublin was jailed for four years on Tuesday after he pleaded guilty at Dublin Circuit Criminal Court to dangerous driving causing the death of Cian Marren at Shanganagh Road, Shankill, Dublin, on July 28th, 2017.

At a sentence hearing last week, Cian’s father, Liam, read from his victim impact statement and told O’Brien that despite “the unbearable pain, hurt, suffering and anguish, and the life sentence of loss we are living, the one emotion we don’t have is bitterness”.

“We want James O’Brien to know that our son Cian forgives you”, he said, before adding that the rest of the family forgave him also.

He described seeing his son in a neck brace, unconscious but still breathing at the scene. He said paramedics told him his child was “very, very ill” and 20 minutes later a hospital consultant broke it to the family that there was nothing that could be done to save him.

“The shock and the terror was unbearable. Even though we were told there was no hope, we prayed for a miracle”, Mr Marren said.

Garda Barry Cormack told Karl Finnegan, prosecuting, that the child, his two sisters, then aged eight and 11 years old, and his aunt had been returning home to their granny’s after a day out at the cinema and McDonalds.

He said the little boy had been anxious to press the pedestrian crossing button for the green man. Once the green man came up, he stepped out onto the road and was immediately struck by O’Brien’s van.

O’Brien stopped his vehicle further up the road and returned to the scene. He later met Mr Marren there and apologised for the accident, saying he didn’t see the red light.

Garda Cormack told Mr Finnegan that drink, drugs and mobile phone use were ruled out as contributory factors in the investigation. He said the weather had been bright and dry on the day.

In his victim impact statement Mr Marren said: “The person who suffered and lost most is our 6-year-old son.

“He is the ultimate victim. He lost his life, his future, he lost his hopes and his dreams”.

When Mr Marren had finished reading his statement, Judge Melanie Greally thanked him and extended her deepest condolences.

“I don’t know how you’ve done what you’ve done, but thank you very much”, she said.

O’Brien, has 32 previous convictions at District Court level, including drink driving and a three year driving ban from 2012.

Sentencing O’Brien on Tuesday Judge Greally noted that Cian was struck within moments of stepping off the footpath and was left with fatal head injuries.

“He carried out to the letter all he had been taught to do before crossing the road,” Judge Greally said before she noted that Cian didn’t leave the pavement until the green man illuminated.

The judge noted that the lights were red for three seconds before the accident and amber for three seconds prior to that, it was a straight stretch of road with which O’Brien was familiar, it was daylight and the driving conditions were good.

“It is impossible to say what passed through his mind in those three seconds,” Judge Greally said before she noted that O’Brien was driving at 10km above the speed limit. She said this speeding was an aggravating factor.

She accepted that he remained at the scene until both gardaí­ and emergency services arrived and expressed immediate concern for Cian.

Judge Greally accepted that O’Brien is wracked with remorse but said he had “unheeded a red light during which pedestrians have an expectation of being safe”. She sentenced O’Brien to four years in prison.

Judge Greally concluded her sentencing remarks by expressing her “deepest sympathy to the Marren Family and all of those who were close to Cian and have been affected by his death”.

She noted that Mr Marren had “carried out the impossible task of expressing in words what they have been through” and added that the family had demonstrated “an extraordinary and admirable generosity of spirit” in expressing forgiveness towards O’Brien.

“It is a fitting tribute to their son and their brother,” Judge Greally said.

She said the most aggravating feature of this “tragic” case was that “a six year old child was lost and his family have been left broken and bereft as a result”.

She further noted that his aunt and two older sisters, witnessed the accident and were themselves also in danger.

Mr Marren described phoning relatives to tell them they only had a few hours to say goodbye to Cian. He said he brought his daughters to the hospital the next day.

“We simply said that Cian was never going to wake up and he would be going to heaven later that day”, he said.

Mr Marren told the court that though his daughters were so young, they had “the horror and anguish of any adult when hearing that news”.

He said he and his wife suggested the girls draw pictures for Cian and tell him stories as they lay beside him “to hug and cuddle him for the last time”.

He said on the Sunday morning relatives put their hands on his son’s “still beating heart” before he was wheeled away to theatre.

“This will haunt us forever”, Mr Marren said. He added that his family is broken.

He described how that Christmas their family opened Cian’s presents by his graveside and that he and his wife visit his grave every night to read him a bedside story.

He acknowledged that his daughters’ childhoods had been severely impacted and that “they know their mum and dad are not the same”.

Garda Cormack agreed with Orla Crowe SC, defending, that O’Brien was in a great state of distress and had asked to be remanded in custody ahead of his sentencing date.

Ms Crowe said her first instruction was to offer her client’s “deepest condolences to the Marren family on their unbearable loss”.

She described the victim impact statement ready by Mr Marren as “a model of charity” towards her client.

She said O’Brien has had problems with alcohol and that his father was also a heavy drinker. She told the court that his wider family was devastated about what happened.

She submitted that O’Brien couldn’t sleep at night thinking about the death and that he had arranged for prayers to be said for Cian and the Marren family.

She said a psychological assessment had placed O’Brien in the “extremely low range” of intellectual functioning.