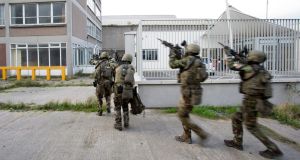 A Corporal in the Defence Forces who was injured in a mock riot control exercise at Cathal Brugha Barracks in Dublin, has been awarded almost €28,000 damages against the State.

David Daly (34), from Annaly Road, Cabra, Dublin, told Judge Terence O’Sullivan in the Circuit Civil court that his foot was broken when a six-foot-long riot shield was slammed down on it.

Kevin D’Arcy, counsel for Cpl Daly, said his client was among 25 to 30 soldiers taking part in a Crowd Riot Control (CRC) training exercise on March 25th, 2011. It involved a group of “aggressors” going against a second group, known as long-shields, who were attempting to quell a riot and restore order.

Cpl Daly told the court he was behind and in charge of the line of aggressors who would be instructed to shout and roar and press against and push the long shields. “At times things would get a little out of hand and it would be my job to help restore calm before the exercise would continue,” he said.

He told Mr D’Arcy, who appeared with Fergus O’Regan of O’Regan Little Solicitors, that the exercise was short staffed on the day and a number of extras had been called upon at a late stage of the plan.

Cpl Daly said it would be normal for a safety briefing to have been held prior to such an exercise but he had not been briefed at any level that day. He said he was an experienced instructor and had participated in a number of similar exercises and knew the drill.

He said that as the “long-shields” advanced he was attempting to calm the aggressors, who had become a bit too aggressive. Near the point of contact with the rioters an order to hold the line would be given and the participants would slam their long shields on the ground creating a defence wall.

Cpl Daly said that one of the long shields was slammed down on his left foot, fracturing a bone. He was then taken by ambulance to hospital. He said it was a normal happening, but not part of any plan, for aggressors to become over exuberant and kick out at the shields. He denied kicking out and striking the bottom of a shield with the top of his foot.

Cpl Daly sued the Minister for Defence and the State for damages alleging negligence in the direction and control of participants slamming long shields onto the ground when in close proximity with would-be aggressors. He also claimed he had not been supplied with appropriate footwear.

He told the court he had been taken to St Brican’s Hospital where x-rays revealed a fracture to his second metatarsal.

Judge O’Sullivan said he had found Cpl Daly a straight, honest and reliable witness as to what had happened on the occasion of the simulated riot and accepted his account of how he was injured. He awarded him €25,000 general damages with €2,857 special damages and expenses.