Children injured in crash in Spain awarded €10,000 each in Dublin court

Circuit Court told the settlements were being dealt with here as Spanish compensation limit was €1,599 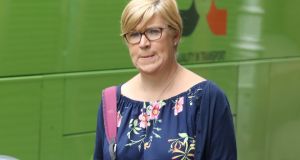 Brid McGinn, mother of Niamh and Caoimhe McGinn, who sued over injuries susuffered in a fatal crash on holidays in Spain. Photograph: Collins Courts

A court has approved settlement offers of €10,000 each to two children who suffered soft tissue injuries in a fatal car crash in Spain, in which their grandmother had been killed.

Judge Kathryn Hutton was told in the Circuit Civil Court on Tuesday that the most the children could expect to recover in damages under the Spanish compensation system was €1,599 each and this was why the two settlements were being dealt with and recommended before the Dublin court.

Mark Byrne, counsel for Niamh Aine McGinn and Caoimhe Mary McGinn, told the court they were aged 10 and seven at the time of the 2016 crash which involved another vehicle driven by a person found to have been intoxicated at the time.

He said the children, who sued Axa Seguros Generales S.A. De Seguros Y Reaseguros through their mother Brid McGinn, had been on a family holiday with their parents in Spain and had each suffered injuries in the crash.

Mr Byrne, who appeared with Brady Kilroy Solicitors, said Niamh had suffered superficial abrasions and had been treated only in Spain. She had not required treatment on her return to Ireland. As in her sister’s case, he could not get any more and did not expect to be offered any higher compensation.

Counsel said that in the case of Caoimhe she had suffered concussion in the accident and had no memory whatsoever of what had happened. She had been treated in hospital in Spain for a number of hours before having been discharged with paracetamol. She had not required any further medical treatment but had attended her GP on her return.

Judge Hutton, approved both settlement offers and said it must have been an absolutely very traumatic experience for the family.

The two settlements were part of overall offers of €211,000 made in 10 cases of compensation claims for personal injuries suffered by children as a result of various incidents in which they had been harmed.