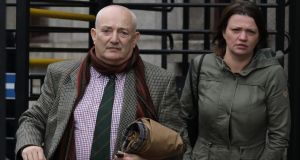 A child who was 15-months-old when he saw his mother covered in blood after she walked into a pane of glass, has been awarded damages of €20,000 for the psychiatric injuries he suffered as a result of the incident.

The Circuit Civil Court heard that Jude Johnson-Rice, now aged five, was with his mother at Terenure College Rugby Football Club in December 2014 when he saw the aftermath of the accident.

Keith O’Grady, counsel for the boy, said Jude did not see his mother Jill walk into the glass, which the court heard was not marked with any warning signs, but was extremely distressed and frightened when he saw what had happened.

Mr O’Grady said the defendants, Panda Play Café Ltd and Terenure College Rugby Football Club, had settled the boy’s mother’s claim and offered a settlement of €20,000 to Jude, who had sued through his grandfather, Brian Johnson of Alderwood Park, Salloon, Ballinamallard, Co Fermanagh.

Counsel told Judge Eoin Garavan that he had two issues with not recommending approval of the settlement.

He said the rugby club had entered a full defence in which it pleaded that the child did not suffer from any recognised psychiatric injury and that the mother had not taken Jude for medical treatment until almost two years after the incident. She advised her GP at that point that Jude had remained very nervous and anxious for six months afterwards.

Mr O’Grady said the defendants had entered into correspondence with the family’s solicitor, who told them that they would incur further serious costs arising out of inspections and the provision of CCTV footage after they denied liability. An offer of €20,000 was made after a settlement meeting.

Mr O’Grady said Jude’s doctor found very little wrong with the child and while seeing his mother injured had the potential to be traumatising for the boy, there had been no lasting negative effect on him.

He told Judge Garavan that while the defendants had not joined the mother as a third party to her son’s claim, they had alleged negligence against her in their full defence. He recommended acceptance of the offer.

Judge Garavan, approving the offer, said that while there was no recognised psychiatric illness diagnosed, there were many cases that came before the court that did not measure up to post traumatic stress disorder.