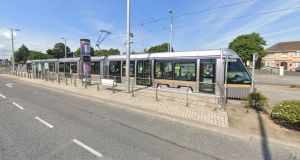 The boy’s mother had been unable to exit the Luas until the next stop at Blackhorse and get another Luas back to her terrified son. Photograph: Google Street View

A four-year-old child was left stranded and screaming on a rail platform when a Luas driver closed the doors before his mother could exit the tram, a judge heard today.

Mr Rooney, who appeared with Paul Byrne of B&P Byrne Solicitors, said Adam had been travelling on the Luas line with his mother, Tracey Connolly, in December 2014. At their Bluebell stop the boy had left the tram first and had been on the platform when the doors had closed on his mother, leaving him stranded.

Mr Rooney said Ms Connolly, of Bernard Curtis House, Bluebell, Dublin, had been unable to exit the Luas until the next stop at Blackhorse and get another Luas back to her terrified son.

He said she had found Adam shocked and traumatised and unable to make his position known to others because of his panic at the time. The boy had since been treated in the care of two doctors but still remained fearful and anxious and had developed a clinging attitude to his parents and family members.

Mr Rooney told the court that following settlement negotiations in May 2018 he had brought an offer of €25,000 before the court which the boy’s legal team had refused to recommend for approval and which was agreed by the then Circuit Court President, Mr Justice Raymond Groarke.

He told Judge O’Connor that the transport company had since increased its settlement offer to €40,000 and he was now recommending the court’s acceptance of it.