Bill Kenneally case ‘may be transferred out of Waterford’ 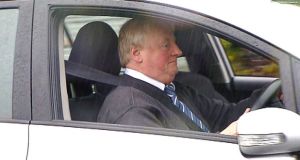 Lawyers for former sports coach Bill Kenneally, who is accused of sexually or indecently assaulting three boys in the 1980s, may apply to have his trial moved out of Waterford, a court has heard.

Kenneally (67) formerly of Summerville Avenue, Waterford city, is charged with 99 counts of sexual and indecent assault alleged to have occurred in Waterford city in the 1980s.

The complainants in the case are now aged in their 40s.

The former basketball coach was sent forward for trial to the circuit court when he appeared in the district court in March and a book of evidence was served on him.

He was in Waterford Circuit Court on Wednesday, wearing dark trousers, a white shirt, a grey cardigan and navy tie, but was not called upon to speak.

His solicitor, Matthew Byrne, said he had spoken with Noel Whelan BL, for the State, and as this was “a recent return,” for trial, “perhaps it could be put into the next sessions”.

Mr Byrne added that they should be able to “progress it at the next stage” and asked for liberty to re-enter the case in the current sessions as there may be a motion.

Mr Whelan said there may be an motion to transfer the case out of Waterford.

Judge Eugene O’Kelly said that, if that was to happen, it would have to be brought before the current court sessions.

He adjourned the case until October 9th, with liberty to re-enter before that.

Legal aid was granted by Judge Kevin Staunton at the district court earlier this year after hearing that the charges against Kenneally were “serious matters”.

Kenneall, an accountant by profession, was involved in basketball coaching in Waterford for several years. He was also involved in local politics with Fianna Fáil, acting as a tallyman with the party at a number of election counts in the city.