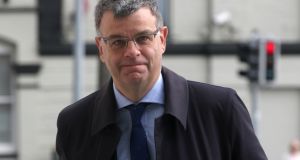 Witness Kieran Kelly, an audit partner with EY, arrives at the Dublin Circuit Criminal Court where he continued his evidence in the trial of former chairman of Anglo Irish Bank, Seán Fitzpatrick. Photograph: Collins

An auditor for Anglo Irish Bank has denied that he engaged in “performance theatre” while speaking to investigators who were examining alleged offending by the bank’s former chairman Seán FitzPatrick.

Mr FitzPatrick (68) is accused of misleading auditors about multi-million euro loans from 2002 to 2007. He has denied all charges.

At the trial in Dublin Circuit Criminal Court on Thursday, defence counsel Bernard Condon SC, put it to the bank’s auditor Kieran Kelly, who is a partner with firm EY (previously Ernst & Young), that he put on a “pantomime” and engaged in “some sort of performance theatre” when meeting with investigators from the Office of the Director of Corporate Enforcement (ODCE).

Mr Kelly said he wasn’t trying to engage in an act and denied he was trying to “buy time” by asking that he be allowed examine certain documents.

He said his solicitors had told him before the meeting that he should examine the documents to understand them and “if I needed to reflect I was to do that”.

Mr Kelly also denied he was given a “tutorial” by his lawyers before meeting with investigators. Mr Condon pointed to notes from his meeting with the lawyers which state “the less you say the better” and “think things through”.

Mr Kelly said the lawyers were advising him on how to answer to the best of his ability.

The witness accepted he gave “misleading evidence” to Judge Mary Ellen Ring during a earlier trial.

Mr Condon said he was “not for a moment” suggesting Mr Kelly wilfully perjured himself or intentionally misled the court. Mr Condon said he believed his earlier evidence was down to a “lack of recollection” which he later tried to correct.

Mr Kelly accepted he had inadvertently given misleading evidence in the previous trial about how his Garda statement was compiled.

“You seemed to suggest the statement was taken in oral meetings where you were asked questions and the gardaí and the ODCE wrote down the answers,” counsel said.

Mr Kelly accepted this was his evidence. He said he also now accepts that the evidence was not entirely accurate and that he had seen portions of another EY auditor’s statement prior to making his own.

“You now accept you did see Vincent Bergin’s statement in advance of making your own statement when you said you didn’t before?” Mr Condon asked.

Mr Kelly said that he did. He said that when he gave the previous evidence he “didn’t remember the entirety of the process of taking the statement.” He added, “to that extent . . . my recollection wasn’t complete”.

The witness agreed his draft statement was prepared by the solicitors firm A&L Goodbody and then emailed to him and various other people including others within EY.

Mr Condon said that the lead investigator with the ODCE, Kevin O’Connell, didn’t believe he would have met with him without lawyers.

“Presumably you are annoyed that he is saying you’re not telling the truth,” Mr Condon asked.

Mr FitzPatrick of Whitshed Road, Greystones, Co Wicklow, has pleaded not guilty to 27 offences under the 1990 Companies Act.

These include 22 charges of making a misleading, false or deceptive statement to auditors and five charges of furnishing false information in the years 2002 to 2007.