Former manager at Dublin restaurant told gardaí: ‘I have never been in a fight in my life’ 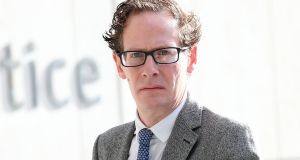 Nicholas Devlin said he had been ejected from McSorley’s pub in Ranelagh after an incident with bar staff clearing away his group’s drinks. Photograph: Collins Courts.

A Galway resident has been acquitted of assaulting a man who later had to have part of his testicle removed.

Raymond Leonard (35) of Sliabh Ban, Ballybane, Galway and with a previous address at Chelmsford Road, Ranelagh, Dublin had pleaded not guilty at Dublin Circuit Criminal Court to assaulting Nicholas Devlin causing him harm at Anna Villa, Ranelagh, on August 30th, 2015.

The jury took just under 90 minutes to enter a unanimous not guilty verdict on day four of the trial.

Judge Karen O’Connor thanked the five women and seven men of the jury for their service and encouraged them to view other court cases if civic duty had stirred up a “passion” in them.

During the trial, Garda Gregory Devoy revealed that Mr Leonard gave a voluntary interview six months after the incident and said he could not recall the night in question. Mr Leonard, a former manager at An Bhialann restaurant in Ranelagh, told gardaí “I have never been in a fight in my life”.

Mr Devlin agreed under cross-examination that his “lasting impression” was of the attacker being 6ft tall. Defence counsel Keith Spencer BL put it to Mr Devlin that his client is 5ft 8. Mr Devlin also agreed that he stated the assailant was wearing a dark shirt.

Mr Spencer asked Mr Devlin to explain why Mr Leonard could be seen wearing a white shirt on pub CCTV shortly before the incident.

The witness replied that he felt it was consistent to give the same evidence, as he thought it had been a dark shirt. He said it would have been harder to distinguish colours outside at night.

Mr Devlin told Diarmuid Collins BL, prosecuting, that he had been ejected from McSorley’s pub in Ranelagh after an incident with bar staff clearing away his group’s drinks. He said he approached another group of people outside the pub to see if they knew the bar staff, as this group had been allowed to remain on the premises.

Mr Devlin said the group’s demeanour was aggressive and he had a short verbal exchange with one man, before this individual punched him twice in the face and kneed him in the groin.

He said he felt “extreme pain” immediately after being kneed and “I kind of crumpled to the ground.”

Mr Devlin told the court he went to hospital the following day and he later had to have surgery to remove part of his ruptured testicle. He agreed with Mr Spencer that he had said “I think I’m certain” when pointing out the individual he said assaulted him on CCTV played in court.

Mr Spencer put it to him that there was some equivocation in his language. Mr Devlin replied that the individual he identified on CCTV in court was the same person he had pointed out to gardaí­ on the same footage during the investigation.

Mr Devlin denied that when giving evidence, he underplayed his state of aggression at being ejected from McSorley’s.

In re-examination, he said the “style and colour of the hair and structure of the head” made him certain the person shown on CCTV attacked him.

Mr Devlin told Mr Collins he watched the footage a number of months after the assault, but “felt clearer in making an identification because at the time of the incident the attacker’s face had been so close to mine”.

Shane Butler, who was working as a bouncer at McSorley’s that night, agreed with Mr Spencer that he was met with a “barrage of profanities” from Mr Devlin when he ejected him.

He further agreed that an incident report he filed afterwards confirmed Mr Leonard, who was a customer at the bar, as 5ft 8in and of slim build.

Violeta Bernades, Mr Devlin’s partner, said she recalled up to five people standing outside McSorley’s after her boyfriend was ejected. She recalled one of these individuals as a young man with fair hair who was a bit taller than her, “very thin” and wearing all black.

She agreed under cross-examination that she told gardaí­ this man was wearing all black.