Charges against man accused over IRA bomb struck out 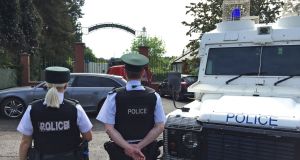 Police and army bomb disposal experts at Shandon Park Golf Club in east Belfast after a suspect device was found under a car in the car park. Photograph: David Young/PA Wire

Proceedings against a Dublin man charged over the discovery of a bomb under a police officer’s car in Belfast have been struck out at the Special Criminal Court.

Paul Casey (49) was previously arrested by members of the Special Detective Unit (SDU) as part of a cross-border investigation.

However, the Special Criminal Court heard on Monday that the Director of Public Prosecutions was no longer proceeding with the case against Mr Casey and requested that it be struck out.

The court also heard that the book of evidence for Robert O’Leary (41) with an address at Clancy Road, Finglas, Dublin 11, who was charged with the same offence as Mr Casey and was granted bail on August 26th, will be served on Monday, November 25th, 2019.

Mr O’Leary’s trial is not likely to take place until either late February or early March 2020, the court heard.

On June 1st, 2019, a bomb was found under the car of a serving police officer at Shandon Park Golf Club in east Belfast. A tournament, which was being held at the golf club, was cancelled and about 70 people had to evacuate.

The device was declared to be a “viable improvised explosive device”. The bomb was discovered a short distance from the Police Service of Northern Ireland (PSNI) headquarters.

Dissident republican group, the New IRA, claimed responsibility for the attack at the time.